Yesterday the monkey visited the Los Angeles Country Arboretum (across the street from the Santa Anita Racetrack) to see some peacocks and it turned out to be another tail (get it?) in his long list of adventures. There are dozens and dozens of peafowl at this park in LA and as Spring approaches the juices begin to flow in these noisy avians. The males will display their train, rapidly shake their tail feathers, and pirouette proudly over and over in the hopes of attracting one of the peahens in the area.  When a nubile hen gets close enough, the male will start a weird shimmy where tail feathers rattle frantically against the plumage sending out a buzzing sound.

As the male spins around he presents his tail section to the female and if that doesn’t get her attention, he’ll try the full frontal view. These guys try hard.

In addition to the peacocks, the 127-acre arboretum has some beautiful gardens featuring plants from Africa, Australia, Madagascar, Canary Islands, California, and a good mixture of other trees and plants from all over the world. Dozens of bird species are here. There is a wow aloe garden, lakes, streams, and waterfalls, and a early 20th Century Queen Anne cottage where movie stars used to hang out.

Lots of movies were filmed here. Tarzan, scenes from Jurassic Park and Murder She Wrote, and others used the park for some of their movie sets.  Some say the park is haunted.

But to the monkey at least, the biggest attraction were the peacocks. Technically they should be known as peafowl since only males are truly peacocks. Females are known as peahens.

Visitors can’t get enough of these big birds. Peacocks have a reputation for being mean and nasty but Kongo didn’t have any problems with them. He did see one ornery bird who took a dislike to a middle-aged woman from somewhere in the Midwest and every time she brought her iPhone up for a photo, the bird charged her. Don’t wear your “Hawkeyes” sweatshirt if you plan to visit. 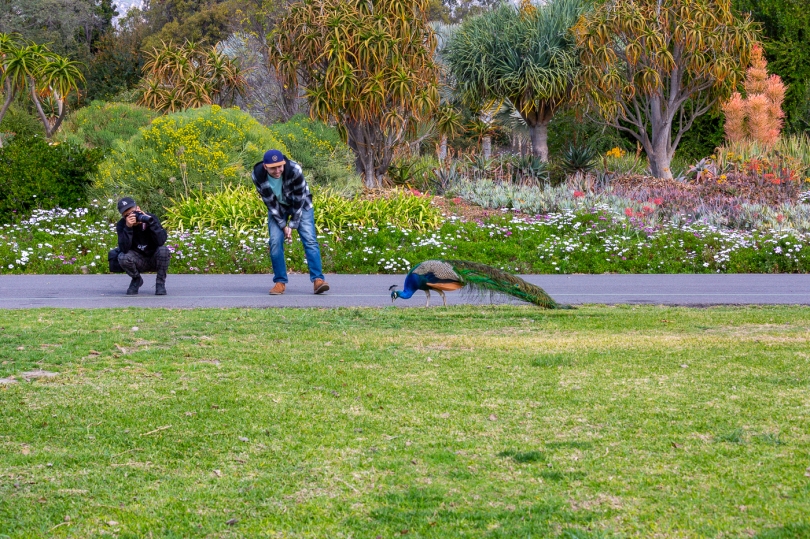 Kongo always enjoys cactus gardens and aloe plants. There are plenty of those here. 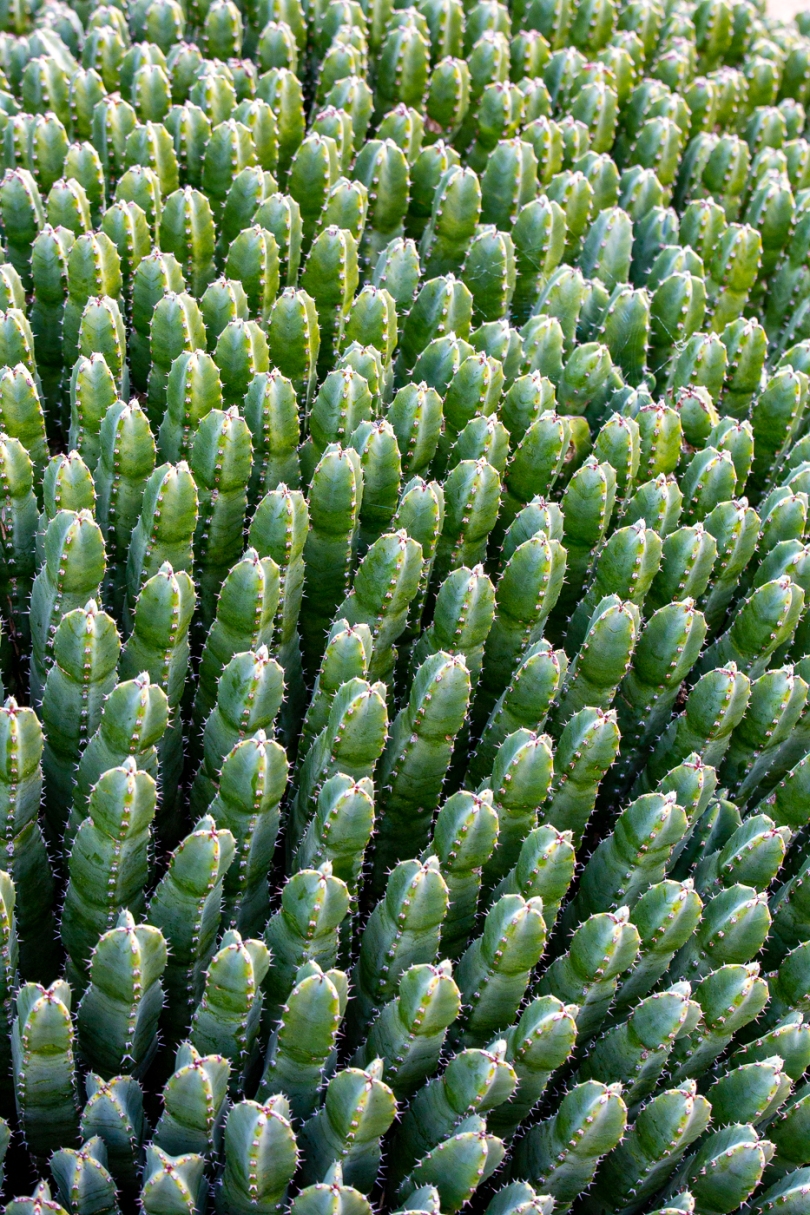 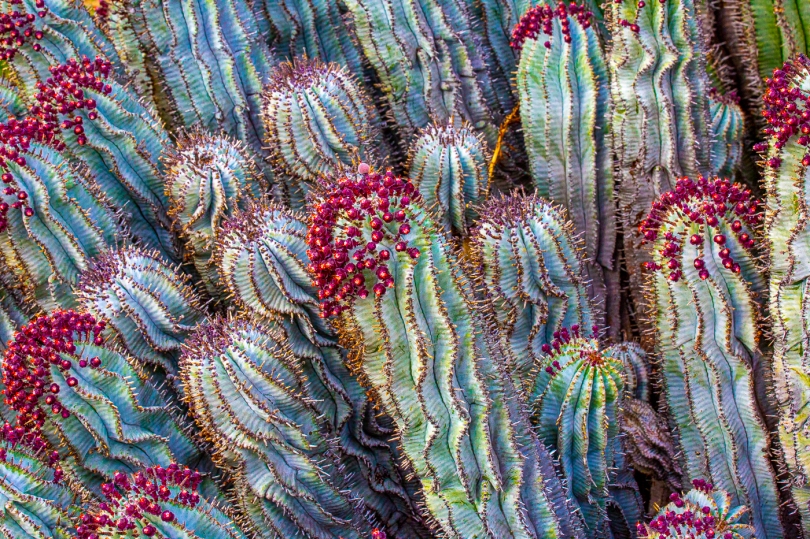 Besides the gardens, there are wide open fields for roaming and throwing a frisbee.  The waterfall (it’s manmade, of course, this is Los Angeles) is nice too. 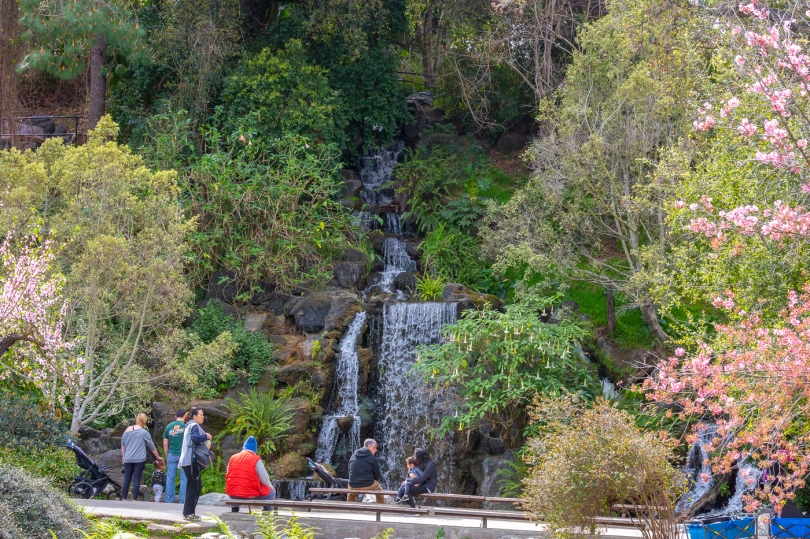 This time of year is a great time to visit the park since cherry blossoms and other flowering trees are approaching their peak blooms.

There is other wildlife at the arboretum. Plenty of birds and waterfowl, turtles and fish are in the ponds, lizards, as well as young children who escaped from their strollers. 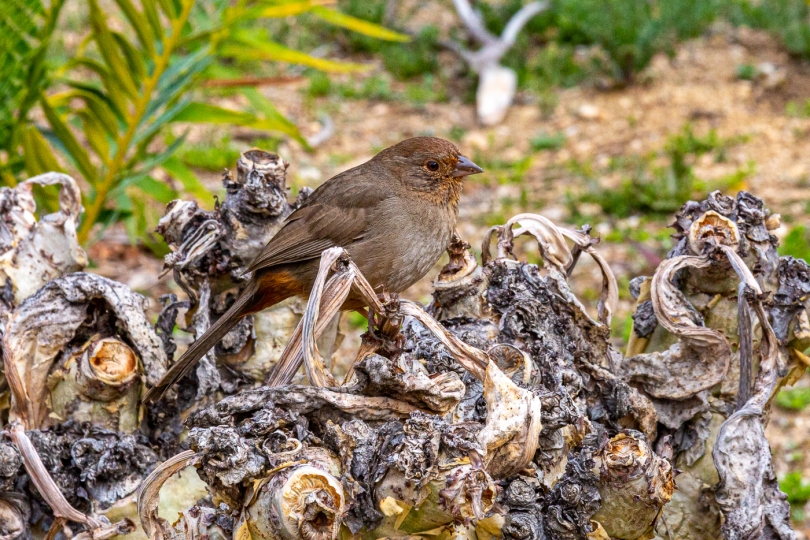 After closing all his rings on the Apple Watch, Kongo headed over to the (where else) Peacock Cafe. This place is aptly named.

There are squawking peacocks all over the place at this eatery (which is actually quite good).  While Kongo was eating his burger and fries a female wandered through the outdoor patio and the male went crazy trying to get a quickie over his lunch break. These birds are shameless. 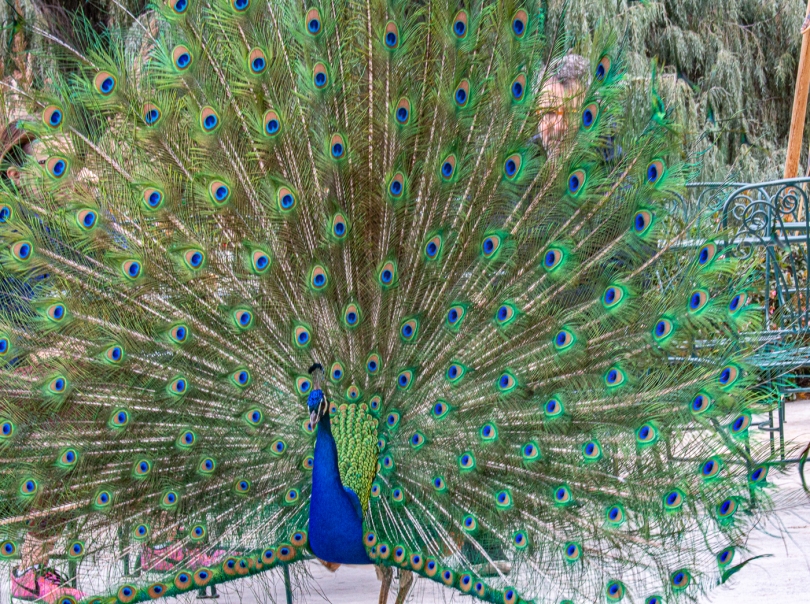 The male above puts on a display right in front of this family (with little children no less) trying to eat their lunch. The female pretty much ignores him. 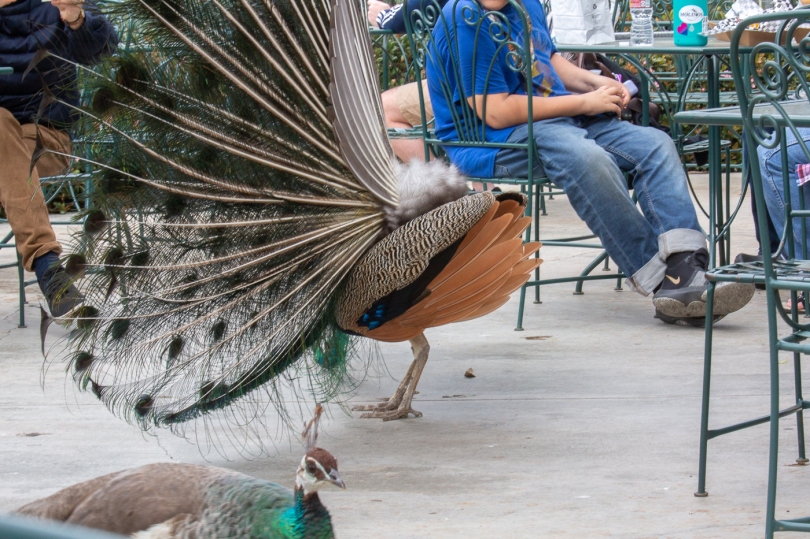 The lusty male spins around and around but the female wanders over to where her friends are having a noontime gossip fest and the male gets completely shut down.

So the next time you’re in LA you may want to set some time aside for a visit to the arboretum. It’s located off the 210 Freeway in Arcadia. Just Google it or you can learn more about the park here. 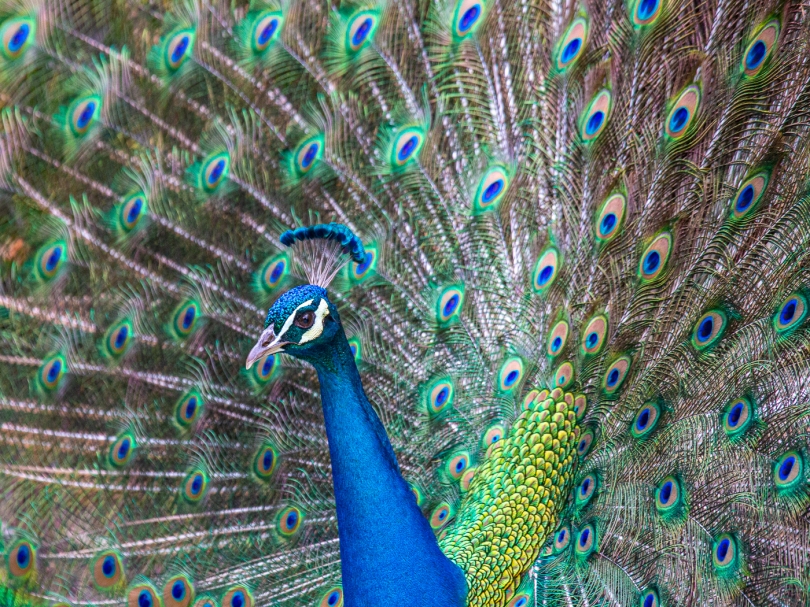