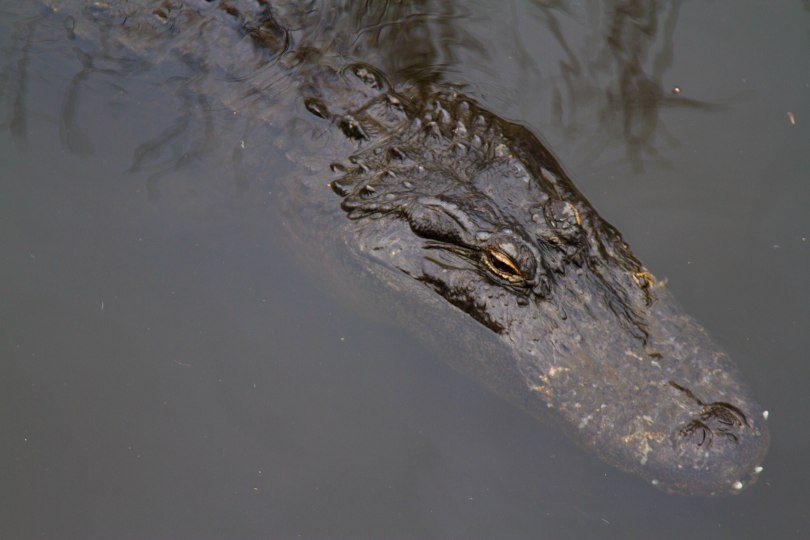 Many thanks to fellow blogger Pam who turned Kongo on to alligators.  She promised interesting photos, lots of alligators, and some great birds and that is exactly what the monkey found when he visited the Alligator Farm and Zoological Gardens in St. Augustine, Florida this afternoon.

Did you know that there are 23 species of alligators in the world?  The monkey didn’t know this either.  Did you perhaps know that if it gets too cold alligators can’t digest their food and will die if they eat?  Kongo didn’t know that alligator trivia either and thus missed the feeding of the alligators today because it was too cold.  It wasn’t bone-chilling but it made your eyes water when you faced into the wind.  It was like a mini Florida polar vortex.  The day was heavily overcast with periods of spitting rain, a brisk gale out of the northwest, and temperature in the low 50s.  This was a bad day if you were a hungry alligator but these guys actually looked pretty well fed,

Who knew alligators were touchy-feely, cuddly reptiles?  It seemed that whenever a clutch of gators got together on land they tended to lay on top of each other and snuggle up.  What’s that about?

This is an image of Gomek, which the Alligator Farm claims to have been the largest crocodile in captivity.  This brute was more than 17 feet long and weighed over 2,000 pounds.  Gomek passed on to Croc Heaven in 1997 when he was somewhere between 60 and 80 years old.  That’s a lot in alligator years.  He was said to be very tame and had an affinity for people.  Like, duh, Kongo has an affinity for lobster.  In any event people used to feed him from within the enclosure and nobody got swallowed.  After his death the Alligator Farm created this shrine to Gomek, stuffed him, made some videos of him in better days, and put him on display.  Kind of like Lenin in Moscow but maybe not just the same.  Gomek’s successor is another saltwater crocodile from New Guinea named Maximo.  Maximo is said to be a much happier croc since they brought over a mate for him named Sydney.  Hmm.  Monkeys are happier with mates too (and here’s a shout out to Mrs. Kongo!)

Besides the gators and crocs (Kongo got the lingo down pretty quickly) the farm has a bunch of pretty cool birds, some exotic snakes, a Komodo dragon, and a bunch of other animals that had the good sense to stay in their shelters where it was warm. 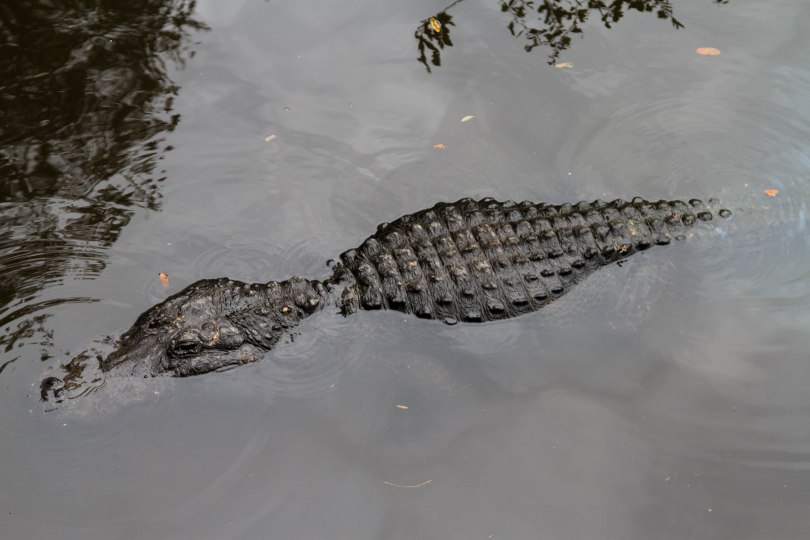 At the end of the day, Kongo realizes he’s nothing more than alligator food if he falls into one of those swampy ponds the park has, regardless of how cold it is.  He enjoyed the visit but all in all, has to admit that he is not going to be a future Gator fan…or is that a football team?

Again, thanks to Pam for the good tip about the Alligator Farm.  Following her advice, he also visited the historic lighthouse in St. Augustine but that’s another blog entry.