Today Kongo hauled himself over to Simi Valley (about ten miles from his treehouse) to finally see the Gipper.  That would be Ronald Reagan and his presidential library set on the top of a high hill overlooking the valley.  This was not a political visit.  Mrs. Kongo’s sister was visiting over the long weekend and it was on her bucket list.  Kongo is pretty much a democrat but that’s obviously not working out too well at the moment so, what the heck, might as well relive some of the glory years of the 1980s.  Kongo was a lot younger then, life was simpler, and the Navy buildup under the Reagan years gave the monkey plenty of opportunities to go to sea so that was good.

You’ve got to give President Reagan credit for picking a great spot for a presidential library.  Close to LA, great views, a small Republican demographic pocket in an otherwise pretty blue state, and it is only about 20 minutes from Kongo’s house.  Tickets are about $30 a head but don’t worry, the parking is free and you will get plenty of chances to upgrade your initial investment by buying into a yearly membership (Mrs. Kongo actually did this) for only $30 more, and then you can get your photo taken just about everywhere and pick it up later for varying prices.  Kongo didn’t do this. 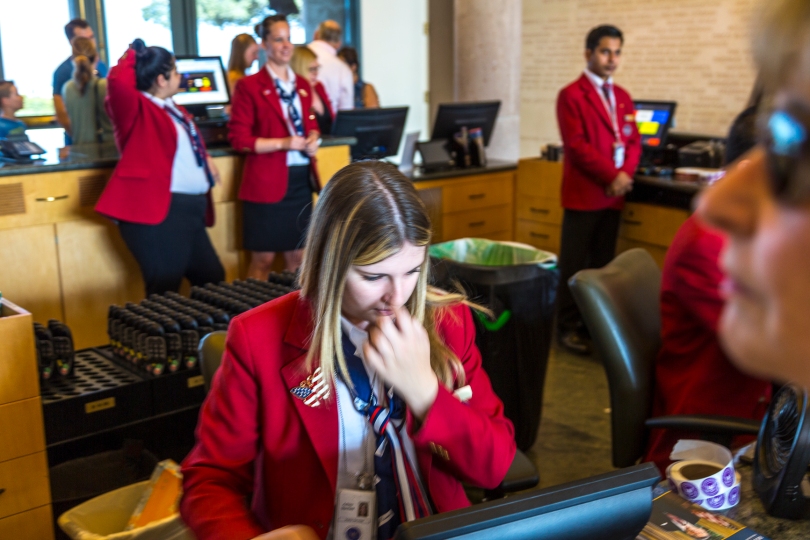 The support staff will get you inside quickly.  Kongo was impressed with the staff and the docents as they all wore spiffy red, white, and blue ensembles (Nancy must have had a hand in that) and were quite cheerful and eager to answer any questions you might have.

The coolest part of the visit, in this monkey’s opinion, was Air Force One exhibit.  Like how often to you get to see a pimped out 737 in such splendor parked inside a building like it was just about to take off and go someplace.  Photography was prohibited inside the plane and the monkey is not sure why.  It’s not like there are any state secrets laying around unattended or that you could grab the “football” (Kongo is pretty sure it was a replica and didn’t have the nuclear codes), or call up President Putin from the command center and ask about election meddling.  Anyway, the monkey obeyed the rules.  While it was super neat it seemed smaller than he imagined.  Kongo distinctly remembers Harrison Ford running around in a much larger plane in that movie where he personally fights the terrorists and pushes them out the door of Air Force One.  Anyway. 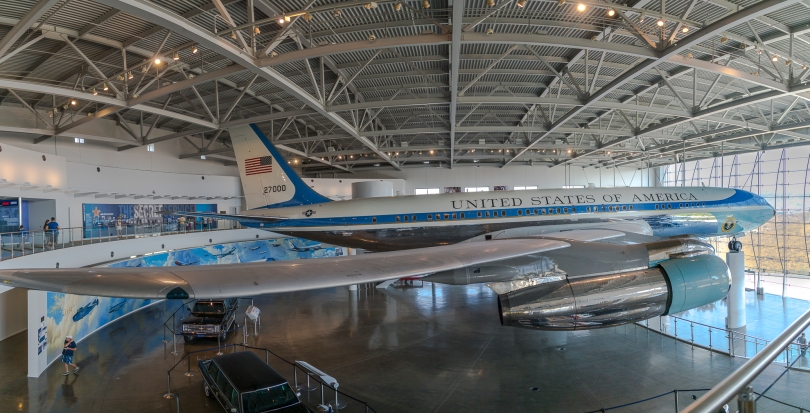 Mrs. Kongo wanted to know how they got the plane inside the building and parked over the Reagan Bar (Yup, you can get a beer with Ronald).  Kongo had overheard someone asking this question already and it seems that they basically built the building around the airplane.  Landing it at the top of the hill, however, was the tricky part and naturally required a trained military pilot. 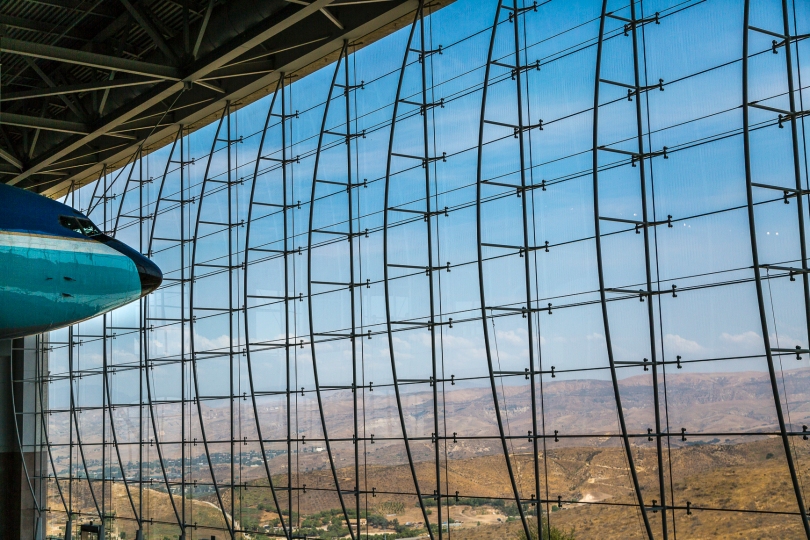 Marine One was there too.  And you could get your picture taken boarding the plane and helicopter looking presidential if that was your thing.

Surrounding the landing spot is a neat mural depicting a lot of former flying White Houses. 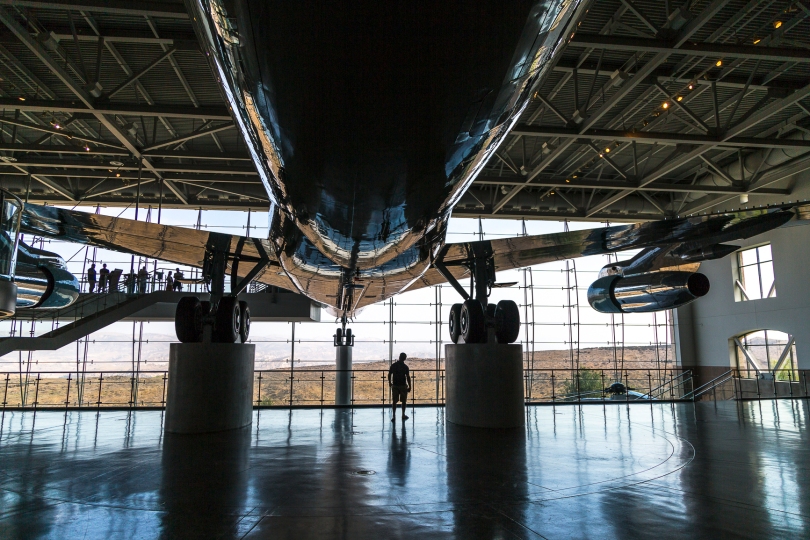 Standing beneath the plane provides a unique perspective on the size and majesty of this aircraft.

Of course there was more to see.  There were lots of interesting videos of the president doing presidential things like winning the Cold War, building “Star Wars,” and battling the Evil Empire (aka Soviet Union, China, Iran, and Cuba).  Not so much about selling guns to the Contras in Nicaragua and the monkey couldn’t find Oliver North anywhere.  But no need to be picky after all these years.  It was a pretty good run after all.

There was a neat section about bringing down the Berlin Wall and a lot of attention was paid to the president and Mr. Gorbachov doing fun things together like solving all the world’s problems then going horseback riding.  Really.  Life was simpler then.

The Oval Office looked like something straight out of West Wing.  Long time docents there said that when the president was still alive he would occasionally drop in, sit behind the desk, and chat with visitors.  Now that would have been pretty cool. 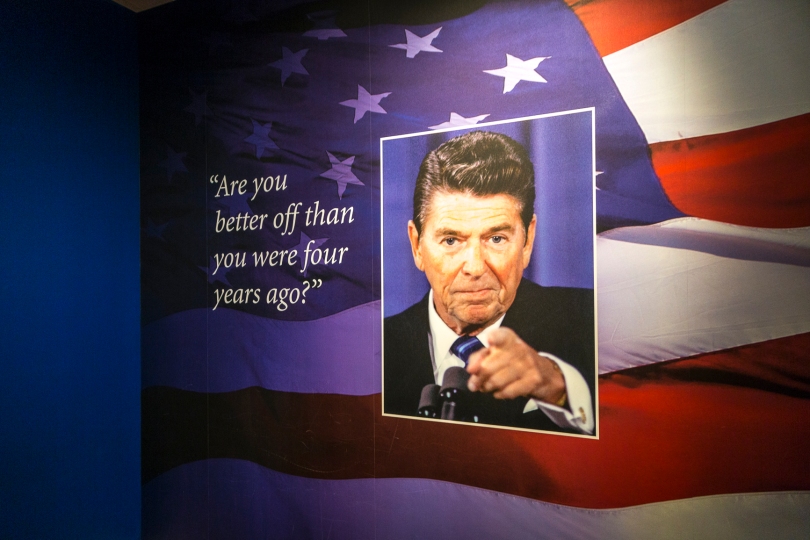 Naturally there was a lot of political sloganeering.  It was almost as if Reagan’s ghost was gearing up for another run at the Oval Office because like he said (first) “Together, we can make America great again.”

Exit through the gift shop (of course) where you can get anything at all with the Presidential Seal or Ronald Reagan’s signature on it.  I mean anything.  Coin purses, T-shirts, baseballs, coins, books, key chains, kitchen magnets, a look-alike stuffed dog that Nancy had, and Ronald Reagan Paddington Bears.  And don’t forget the presidential china.  That’s something that would be perfect for the next Thanksgiving political dinner at your house!  You can even get the same style Stetson cowboy hat that the president wore when he was out at his ranch aka The Western White House chopping up wood with a chain saw. 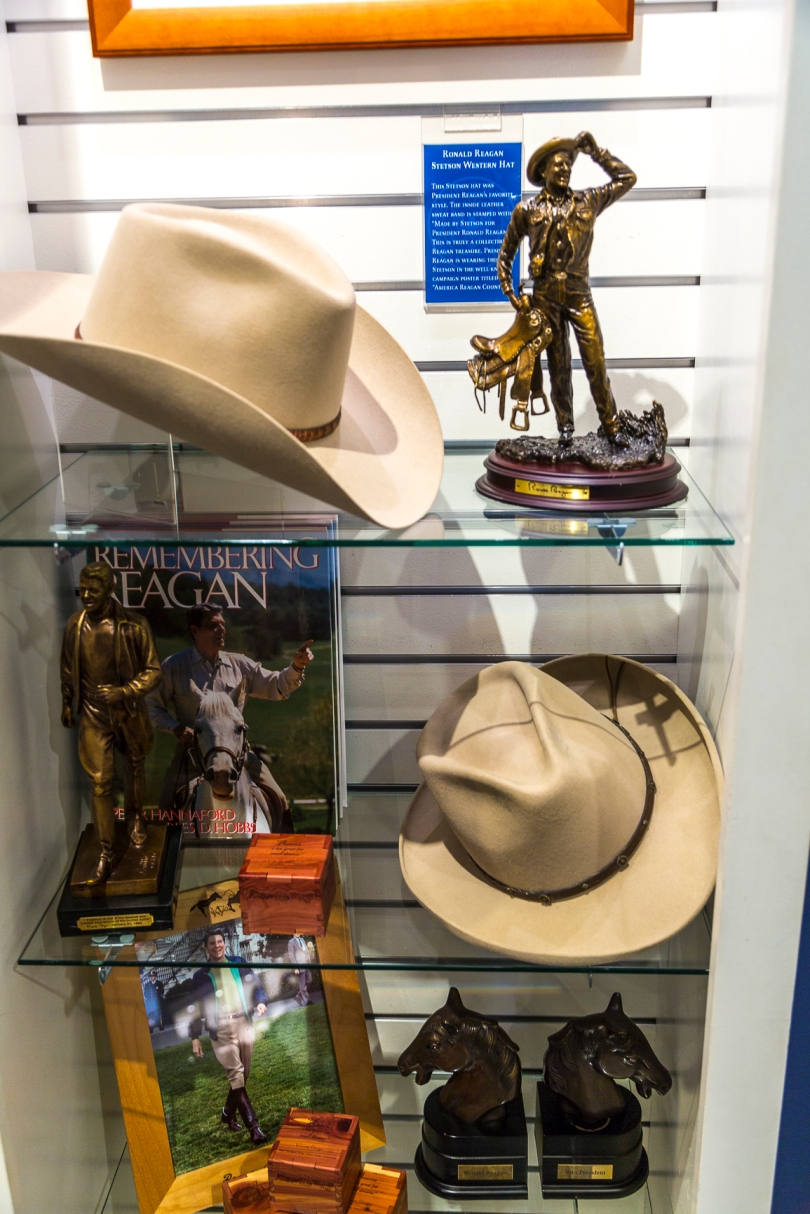 Kongo enjoyed his visit.  There was a very interesting Titanic exhibition going on too but the monkey will save that for another blog post.  This was the first presidential library Kongo has ever visited and I guess he was a little disappointed at how commercial it was.  Lots of opportunities to spend money but hey, this is America.

Had to skip the gravesite.  A freakish Southern California thunderstorm was starting and Mrs. Kongo was pining for Mexican Food.  Since he is now upgraded to a full year-long membership he can see it the next time.  Kongo did see this toothsome bust of the president but it just didn’t sit well.  It was really too toothy. 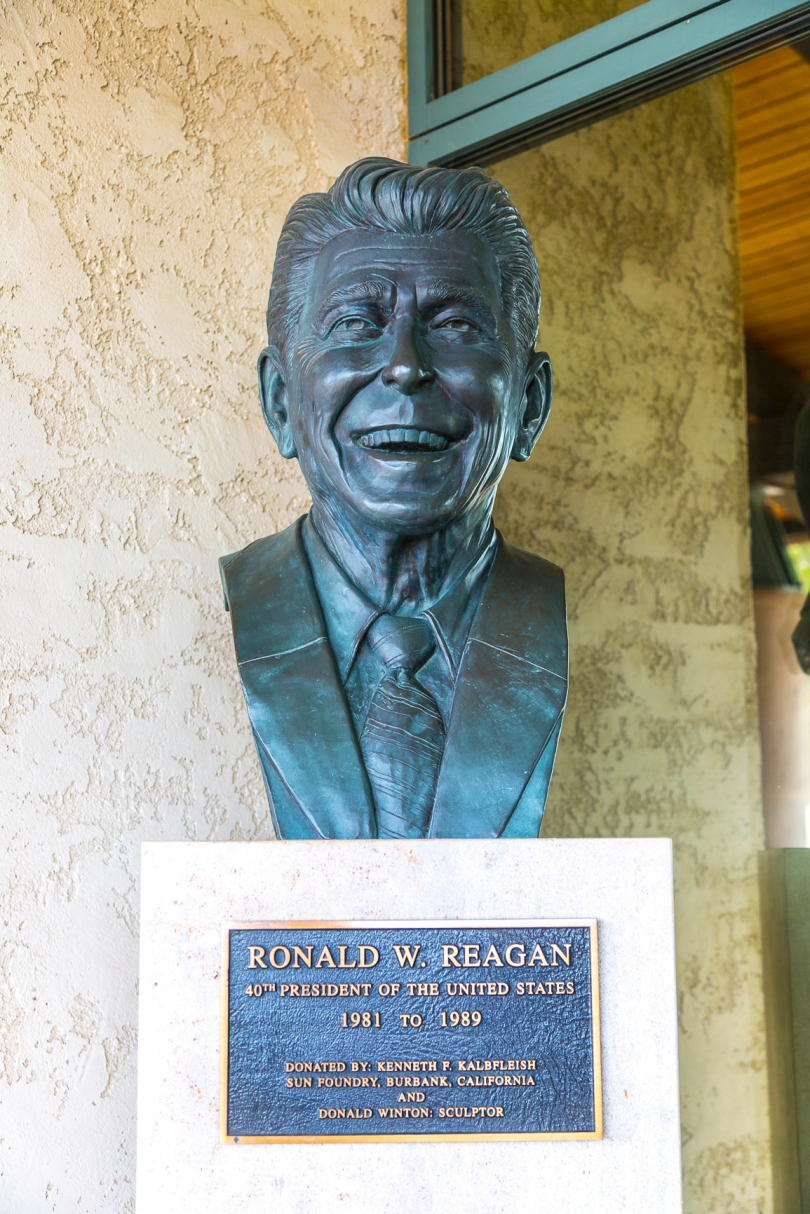 Check out more information about the library at https://www.reaganfoundation.org. 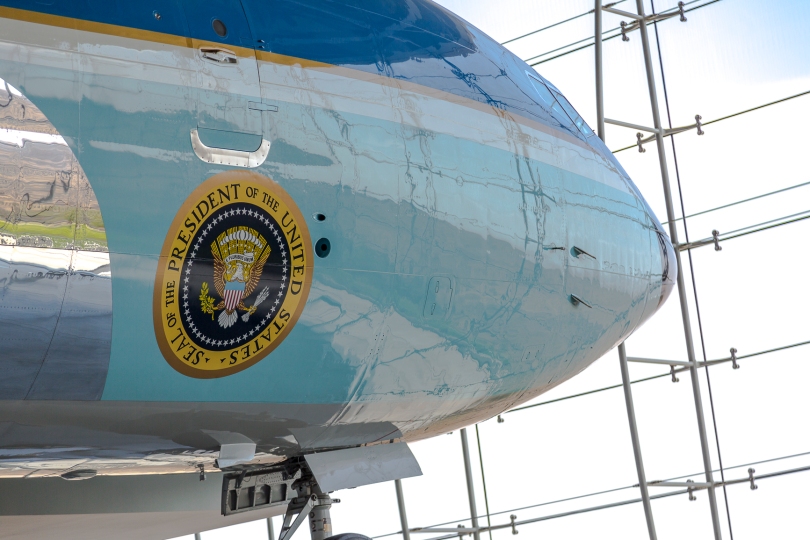