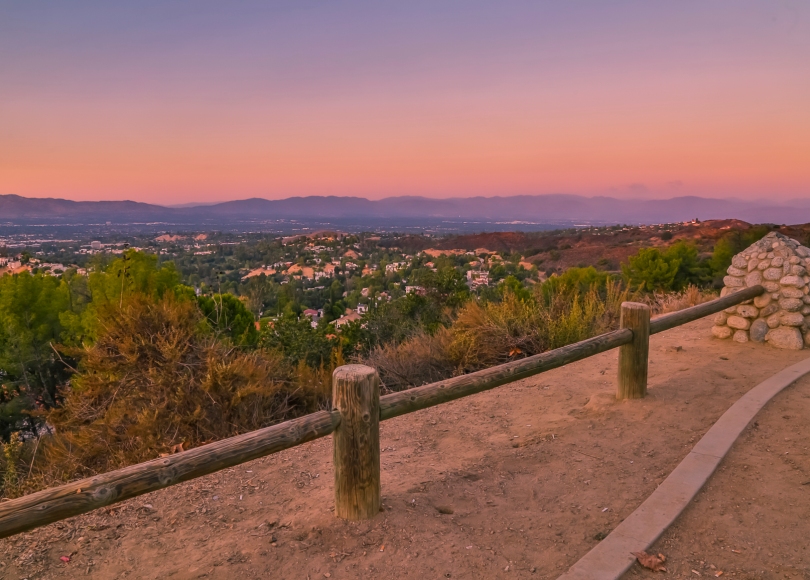 High above the San Fernando Valley, home of Valley Girls, most of the world’s pornography business, 2.9 million people and the 1994 Northridge earthquake is a L.A. Park known as Top O’ Topanga.  The nine acre park is a popular spot to view sunsets and provides spectacular views of the Santa Monica Mountain, the San Gabriel Mountains, and the Santa Susana mountains in the far distance.  Topanga is a name that means “crazy people” and it refers to the early settlers who used to run around naked and grow sunflowers on the mountain.  (Kongo just made that up).  Topanga is actually a native American name that means “Where the Mountains Meet the Sea.”  Really.

Kongo visited the spot last night to watch the sunset and some guy flying a drone above the valley.  The drone was actually pretty cool and must have cost a small fortune because he had it up for over an hour and he had a little TV screen where he could watch the video real time.  Except for landing, the drone was out of sight and beyond hearing — just a little speck that kind of looked like a little bird.

Anyway, a lot of other people popped in to see the view.  One romantic couple drank some wine while watching the sun go down and another, younger couple smoked a joint or two and ate sunflower seeds.  Hey, it’s legal now, right?

The overlook is located on Topanga Blvd., a winding road that connects the Ventura Freeway to the Pacific Coast Highway in Malibu.  About half-way between these two iconic roadways is the funky town of Topanga (see Kongo’s blog post) which seems closer to the country of Bhutan than LA.  It’s a throwback to the 1960s counter-culture so if you’re out of tie-dyed T-shirts or candles, or bonsai plants it’s the place to visit.  The overlook park is right at the top of the grade — hence the name — and is well marked.