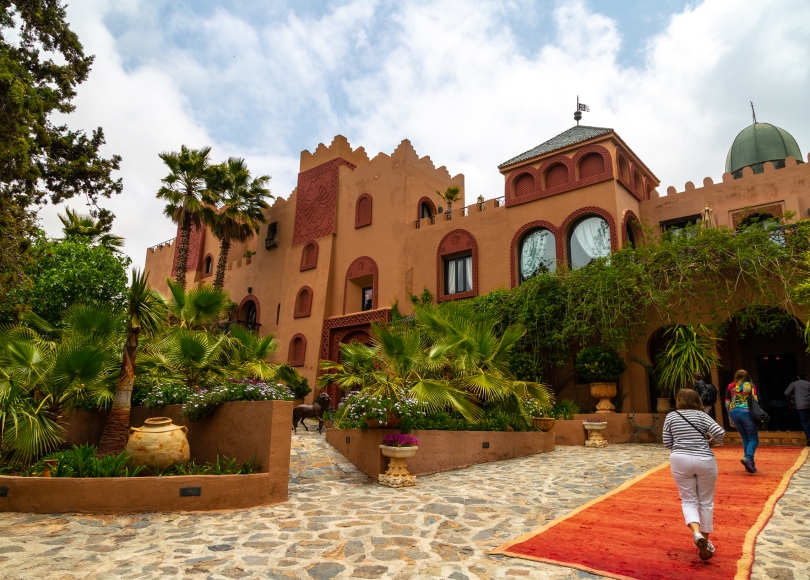 On our last full day in Morocco, we left Marrakech and drove north over the High Atlas Mountains toward the coastal plain that would take us back to Casablanca, the airport, and a very, very early flight to Paris the next morning. 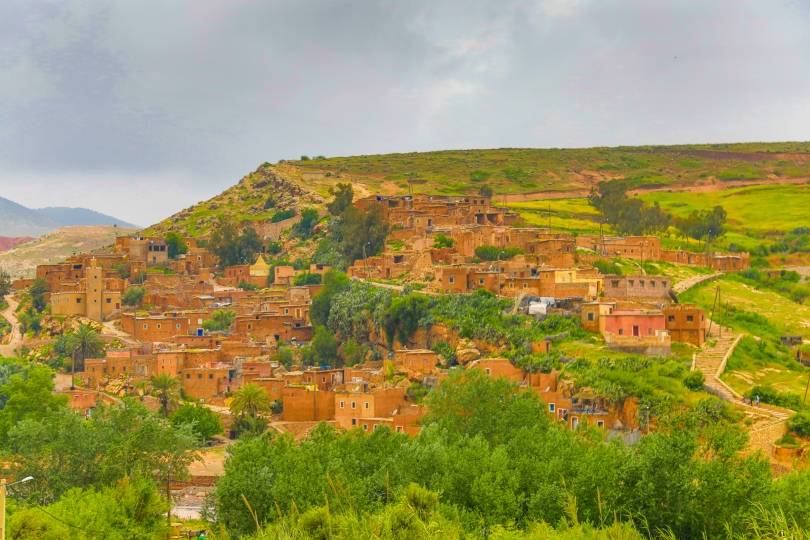 On the way, about halfway to the mountain pass, we stopped at a weekly Berber market in the village of Ansi. As a village, Ansi pretty much looks like dozens of other villages we passed through: a scattering of adobe homes, a few satellite dishes, hole in the wall shops, and streets filled with donkey carts and scooters. Ansi, however, has a market and Berbers from the surrounding area come here each week, as they have for maybe thousands of years, to sell their wares, stock up on food and supplies, and exchange gossip and news with one another.  You could tell straight off that this wasn’t another bazaar run like we did in the medinas of Fez or Marrakech.  This wasn’t a tourist stop. This was life in rural Morocco.

It had rained overnight and the ground was muddy and you had to dodge puddles as you made your way through the market maze. A few hopeful touts tagged along, leaning in to the women with crude trinkets. They were hard to get rid of. They knew the meaning of the word persistent and were not taking la, shukraan for an answer.  Maybe they didn’t understand the Arabic phrase for “no thank you.”  After all these guys spoke Berber. 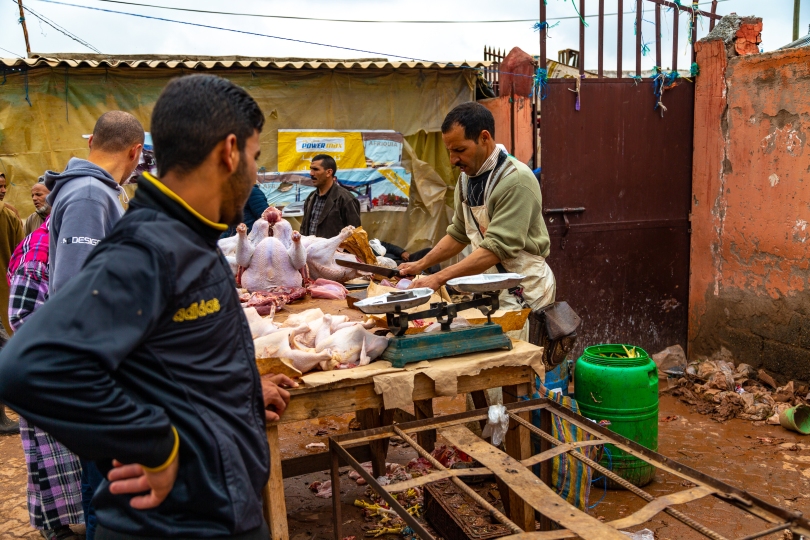 The smells of fresh butchered meat, spices, kabobs cooking over charcoal, and wet animals wafts over you as you make your way through the maze of makeshift stalls and goods piled on the ground.  There were mostly men in the market, both shopping and selling.  Kongo is sure they had their lists of weekly goods to take home.  Haggling vendors and skeptical customers argue back and forth.  Men pushing carts of goods yell for you to make way but there’s no place to go.  You’re stuck in the throng.  Mud everywhere.

You can get a haircut here in the market or across the way you could get a tooth pulled by a smiling guy holding up some pliers.  Kongo wouldn’t say they were rusty but they were definitely well used and there are lots of Berbers around with missing teeth. 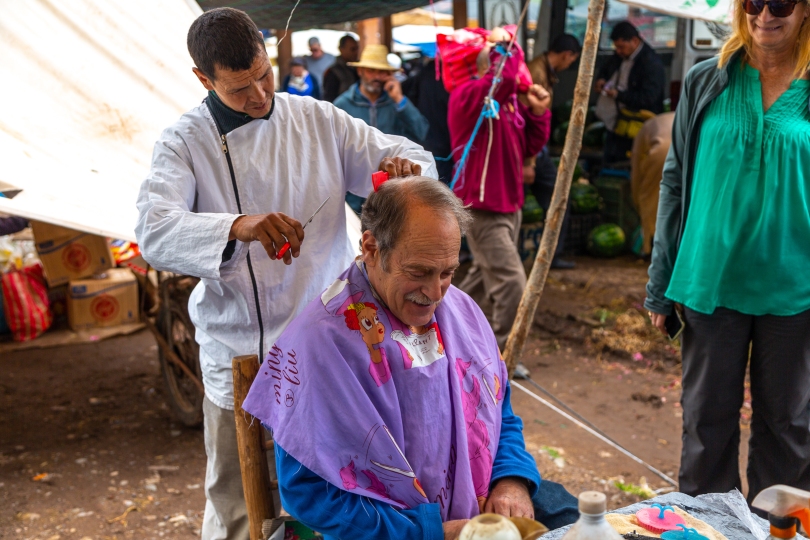 Bruce, the adventurous one in our group allowed himself to be sat down and have a quick trim by the Berber barber.  He passed on the offer of a shave. 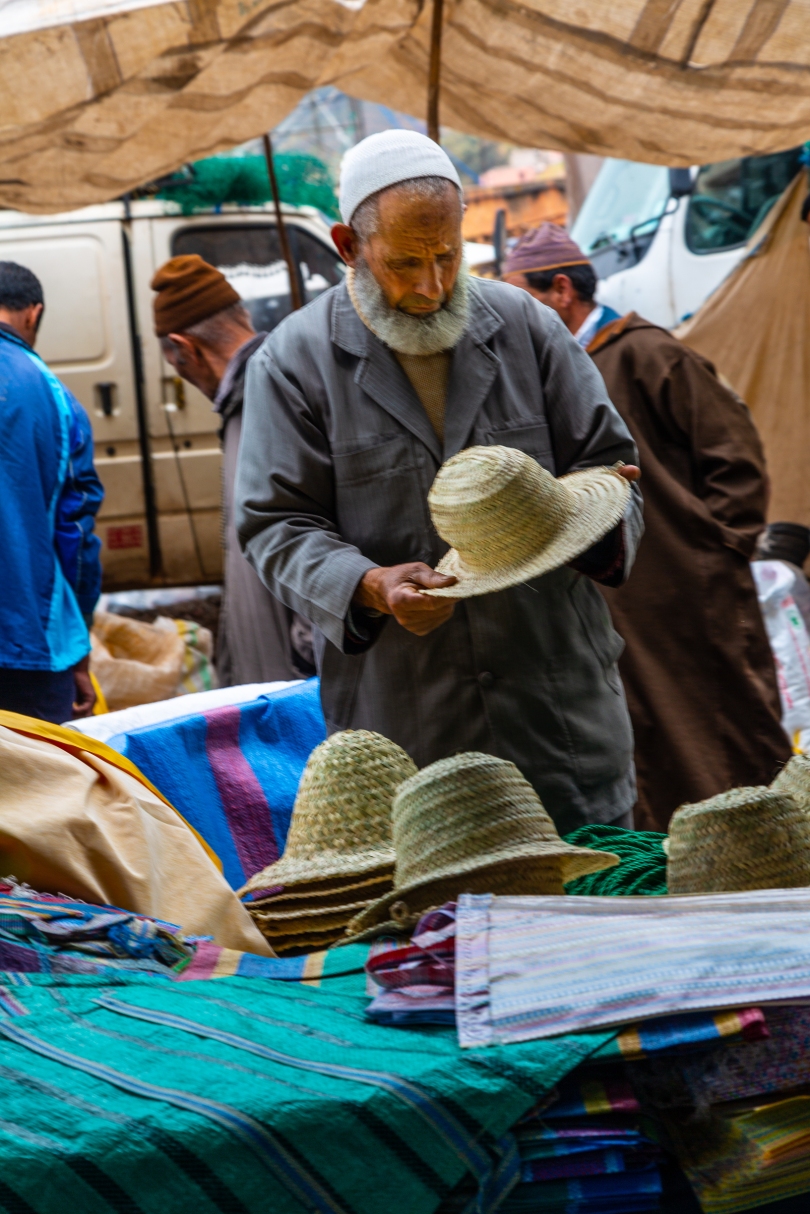 Unlike the bazaars in the cities, the dishes sold here were purely utilitarian.  No fancy designs or inlaid decorations for the tourists.  These tagines were pure function.  (A tagine is a two-piece earthenware pot used to slow cook Moroccan food.  It’s sort of like a North African crock pot.)

Need a new pair of shoes?  No problem. 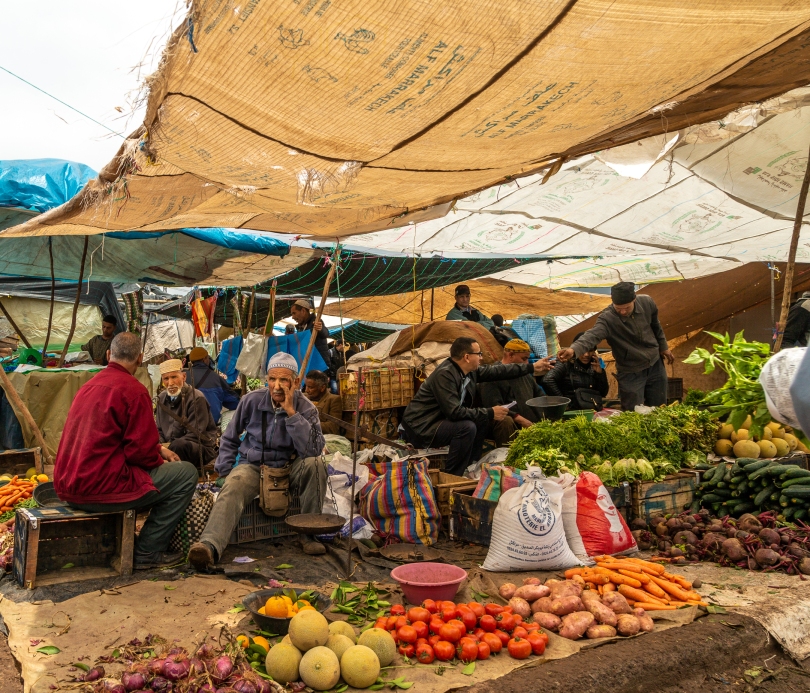 Mostly the market sold food.  Fresh meat and produce.  And spices.  Everything you needed to whip up a Moroccan dish. 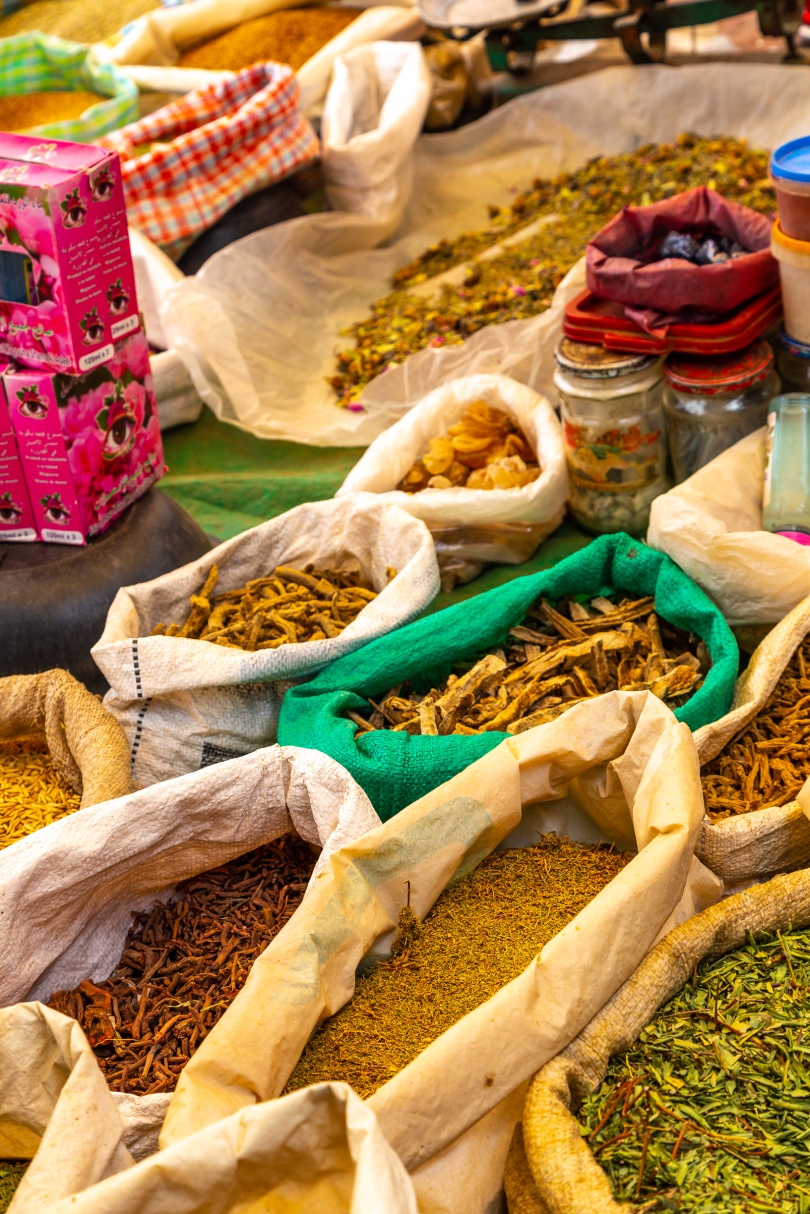 We left the market and headed for lunch at the nearby Kasbah Tamadot, Richard Branson’s retreat resort in the mountains.  The contrast between the market and Sir Richard’s digs couldn’t have been greater.

A suite at Kasbah Tamadot the day we had lunch was just under $3,000 a night.  Of course it came with free WiFi and a fully stocked mini-bar and included breakfast.  Well-heeled ladies in elegant casual wear wandered about with highly priced Hermes (according to Mrs. Kongo and she would know) handbags over their shoulder and discussed their plans for the day.  There is a gift shop (of course) and Mrs. Kongo hit that up (she was running out of time for shopping) and came out with three small clutches…thankfully they weren’t Hermes!

We had a leisurely lunch on a terrace overlooking the pool.  Service was fast and efficient (not always found in Morocco), waiters spoke excellent English, and the food was excellent.

Over lunch there was a spirited discussion about power, wealth, and income inequality.  Actually our troop didn’t put it in exactly those terms but Fareed Zakaria (from CNN GPS) would have been right at home here.  Overall this was a relatively left-leaning group of travelers who have been around the world a lot, travelled to many places, were successful in their careers, and knew a thing or two.  But wry Kongo couldn’t help but note the ironic context of disparaging expensive Hermes bags while sipping white wine in Richard Branson’s retreat with mud from the Berber market still on our shoes.   But you couldn’t help but reflect on the chasm between those in the market and us sitting about the table.  It was right there in front of you, in your face.  Kongo tends to be somewhat sanguine on these matters.  He gave up on changing the world a long time ago and is content to hope for the best and do what he can in the moment, respect his fellow monkeys from all walks of life, and keep Mrs. Kongo happy. 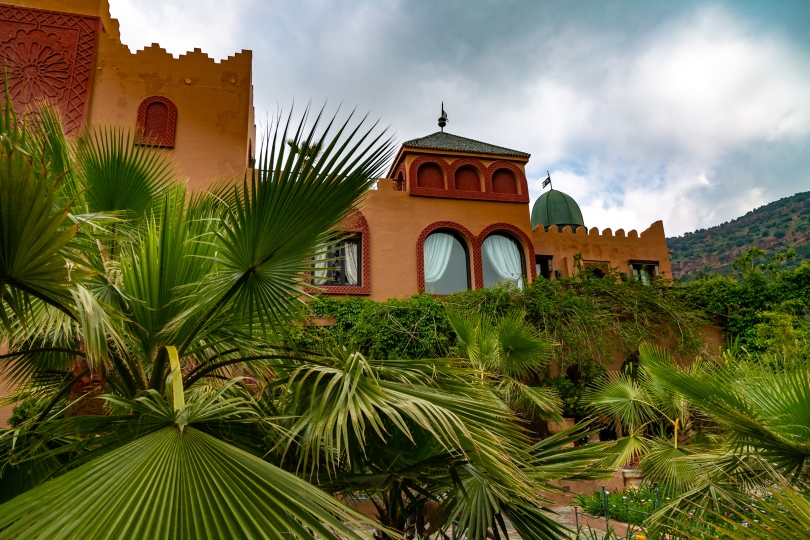 The wonderful thing about traveling is that you become exposed to these issues in real time.  You can see it, smell it, and roll around in it if you like. It’s better than watching it on TV where you see the world through the lens of another.

Before lunch ended we had moved on to more mundane topics like what time did we have to get up to make it to the airport in the morning.  In Kongo’s case it was 3 AM in order to catch a 6:40 flight to Paris, connect to a long haul passage to Seattle, clear customs, and transfer for the final flight into Los Angeles, drive an hour to home, and get there about 10 PM the following evening.  You got tired just thinking about it.

After a three hour drive we were back at the Four Seasons in Casablanca (thoughts of income inequality forgotten and just thankful for good WiFi).  For our final dinner we rounded up all the usual suspects and headed out to Rick’s Cafe, as in “In all the gin joints in all the world, she has to walk into mine …” Ricks.  Kongo had two martinis.  Play it again, Sam.