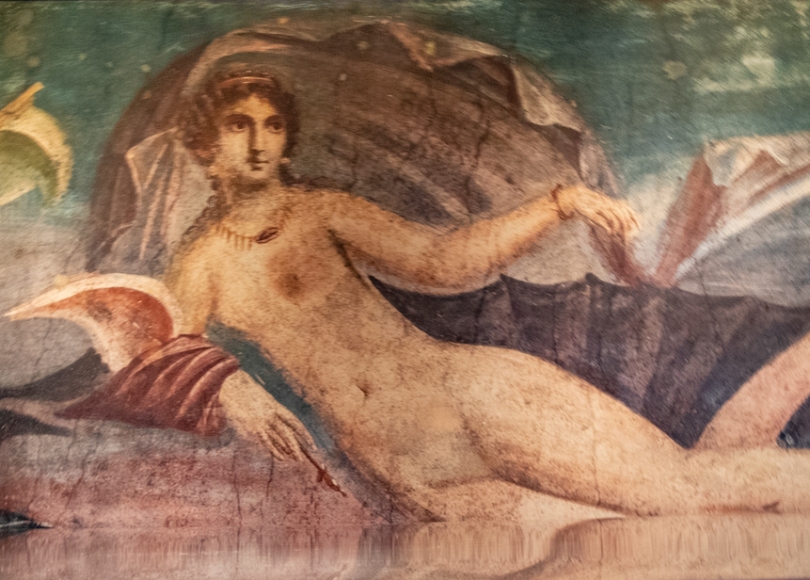 Ancient Pompeii is one of those places that people today find endlessly intriguing.  This Roman city, a prosperous vacation destination on the Bay of Naples, was completely destroyed on August 24, 79 when Mount Vesuvius  erupted and buried Pompeii and several other town in the area under volcanic ash and pyroclastic material.  Rediscovered in the 1700s the excavation of Pompeii continues today, revealing its hidden secrets in spectacular fashion.

A traveling exhibition of a few hundred artifacts from Pompeii (and nearby Herculaneum which was also destroyed by the eruption) is making its way around the United States and is presently (until April 21) at the Reagan Presidential Library in Simi Valley.

The exhibits create snapshots frozen in time that allow us moderns a glimpse into daily life in a Roman city of the first century.  Cookware, storage vases, statues, wall frescoes, tools, dinnerware, and much more have been recovered and are now on display.  Several people from ancient Pompeii are also traveling with the exhibition.  Read on!

Ancient cookware includes a frying pan, bowls, colanders, salt cellars, and scoops.  Things you would find in any modern kitchen.  Holes in the handles indicate they would have been hung from the ceiling or on a wall. 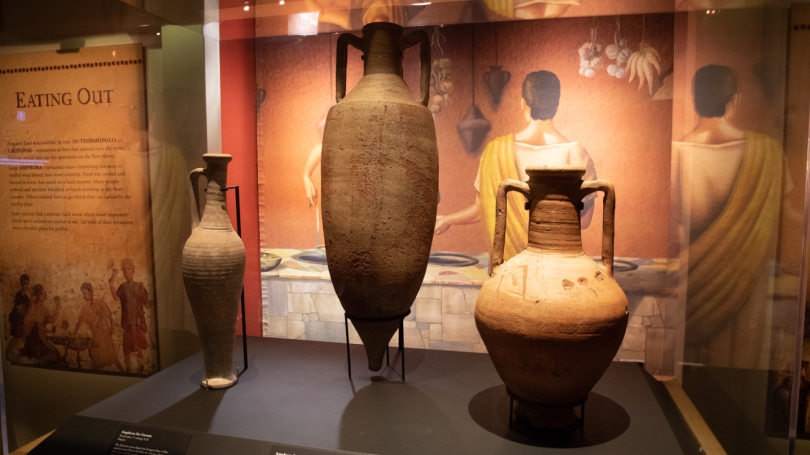 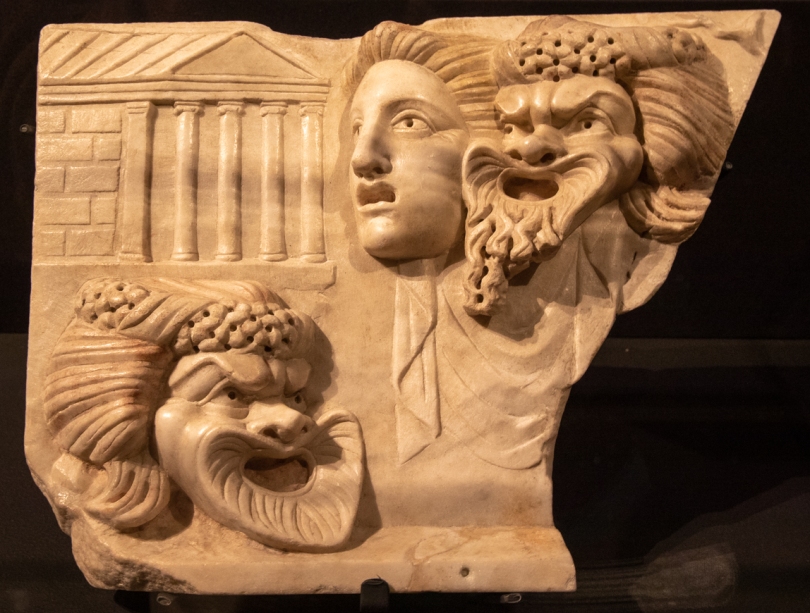 The marble relief above depicts theater masks and would have decorated the walls of a theater in Pompeii, a popular destination for the people there. 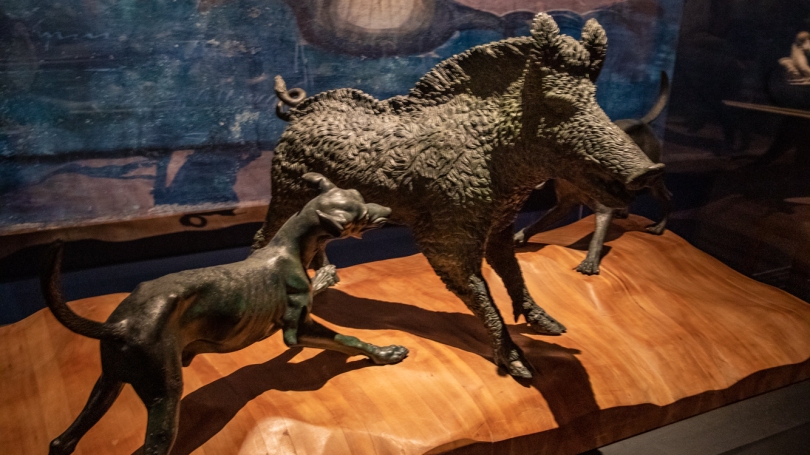 This bronze collection of hunting dogs attacking a boar is incredible in its detail and artistry.  It would have adorned a fountain in an opulent villa and water is designed to come out of the mouths of the animals.

Kongo’s favorite piece is this larger than life marble statue of Venus, whom the Greeks called Aphrodite.

Venus, the goddess of love and beauty,  modestly covers herself as she emerges from a bath in a classic contrapposto pose. The iconic top knot was a favorite attribute of Venus.  At some point this statue was broken into several pieces but has been patched together.  Notice the toes on the feet — the little toe is much, much smaller than the others.  The hands appear to have strikingly similar shapes.

Another marble the monkey loved was this portrait bust of a Roman woman.  Romans painted their statues and they were not pure white marble like we expect today.  Flesh, eyes, hair, and lips would all be colored, sometimes garishly by our standards.  In this bust you can still see the remains of the hair that was colored a dark brown.

We don’t know how many people were actually killed in the eruption of Pompeii.  Certainly hundreds were killed by falling stones or rubble or overcome by the poisonous, heavier than air, gases that would have swept over the city.  However many did survive and manage to escape.  Those who didn’t make it were covered in ash that solidified over the centuries.  When the bodies decayed they left behind cavities in the volcanic material that when filled with plaster produce remarkable recreations of the people who were there. 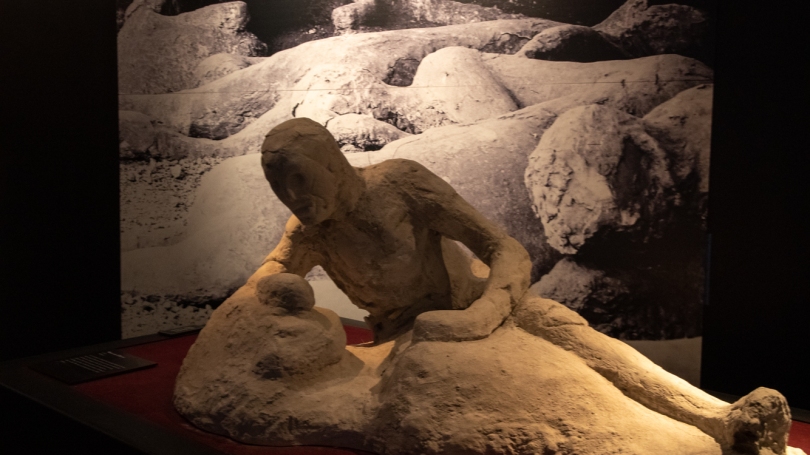 This man was caught struggling to claw out of the ash.

Here a child is depicted and you can almost make out the details of the agony on the face as he was overcome.

Pets were also caught up on the destruction.  Here a dog, still chained with a collar.  Did the owner flee without the dog?  Were they someplace else when the destruction came and were unable to free it? 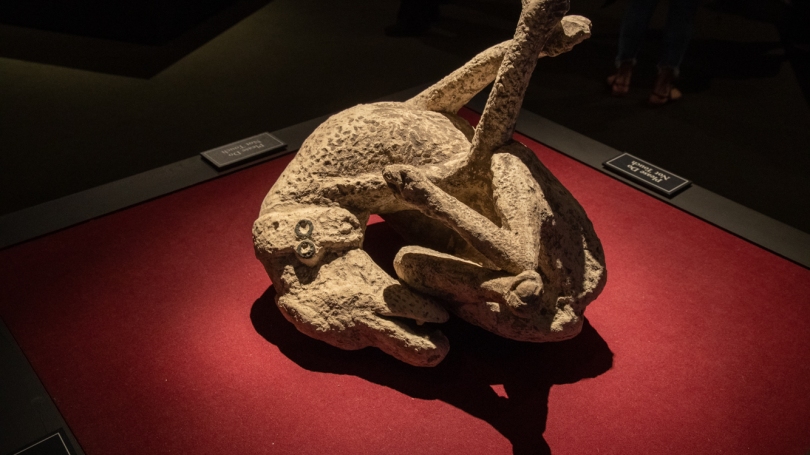 At the end of the exhibit there is a 4D experience that depicts the destruction of Pompeii, complete with shaking floors and eerie mists that sweep over visitors.

Overall this is a nice exhibit.  Kongo took exception to the way many artifacts were displayed (they’re almost all behind glass) and it’s not as nice as visiting Pompeii in person, of course, and the collection is not nearly as extensive as the permanent Roman collections at say the Getty Villa in Malibu.  But it is nice.

It will take you about an hour to make it through the complete exhibit. There is an additional $13 per person charge in addition to the museum entrance fee of $29 per person.  Self guided audio devices can be had for another $7.  Overall the monkey thought this a bit (actually quite a bit) pricey for the extent of the exhibit but it’s cheaper than a plane trip to Italy to see the real thing.