On the way to Prague Kongo stops off at Karlovy Vary in the Bohemian region of the Czech Republic. Karlovy Vary, also known as Carlsbad. is famous for it’s opulent hotels, shops, pilsner beer, and spas. What a beautiful place. Nestled between scenic forested hills, Carlsbad is built about 13 major hot springs along with about 300 other more minor springs. The hotels and shopping are equal to Beverly Hills and Rodeo Drive. Mrs. Kongo was starting to hyper-ventilate until Kongo led her to lunch at the Grand Hotel Pupp and a walking tour of the “waters.”

The two photos above show some of the areas where visitors to the area can take a walk and sample the various waters. The basic idea is to walk around to all the 13 water sources and sip the waters from special water cups you can purchase for a few Euro. The various watering holes come out at different temperatures which range from warm to very hot. Different temperatures are supposed to be able to address different ailments but as one of the remedies was the laxative-like properties of the waters and Kongo was looking at another two hours on the bus to Prague, he wisely chose to pass on actually sampling the waters.

Above, Kongo has a pilsner at the famous Hotel Pupp, an over-the-top elegant hotel where the parking lot overflowed with Bently’s, big BMWs, Ferraris, Land Rovers, and Audis. The hotel has been the scene of several movies, including Casino Royale. 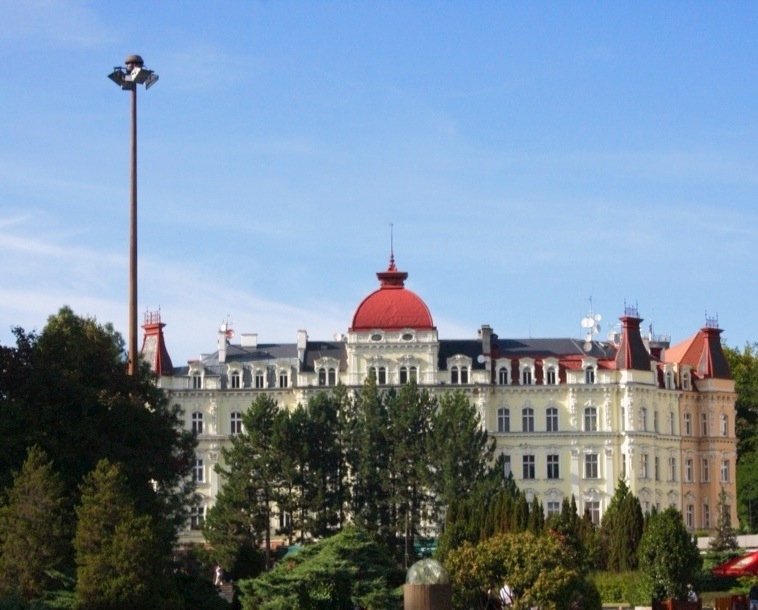 The most common language heard in Carlsbad was Russian. During the Cold War this part of Bohemia was a resort area for communist party bigwigs and after the Soviet Union collapsed in the late 1980s, newly enriched Russian businesses bought up much of the town. Today, Carlsbad is considered “Russian.” No matter. It was a beautiful break on the way to Prague.