One thing Kongo noticed as he travelled about central Europe in areas that were once part of the Soviet bloc was graffiti. From Budapest to Prague and most everywhere in between graffiti was common and it wasn’t just in depressed areas or neighborhoods where you might suspect gang activity like you might see in the United States. In most of these places graffiti was common in the beautiful parts of the cities on historical buildings, on landmarks, in areas where you would least expect to see it. So, Kongo wondered, what’s up with all the graffiti? 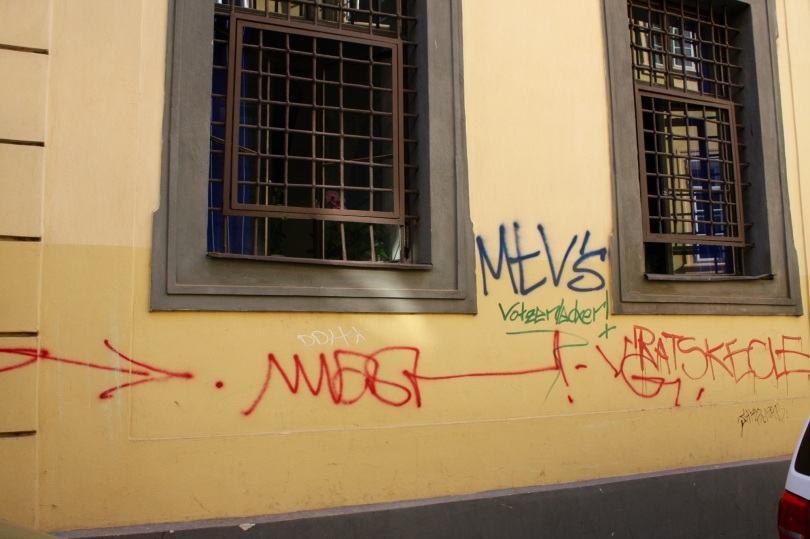 At first, Kongo avoided photographing graffiti, burdened as he was with an American sense of what is right and proper. Frankly he was a bit embarrassed for the towns where graffiti was evident. It was sort of like when you visit a friend’s house and notice unmade beds or dirty dishes in the sink and studiously avoid saying something like, “Holy bananas, you guys have a party last night and didn’t invite me?” It was just awkward and Kongo, being a polite little monkey, mostly put his lips together and pressed firmly.

Finally, in Prague, he mentioned it to a particularly candid guide who wasn’t shy about saying things like, “Politically, our president is a fool. He just wants to be on TV.” Thinking this could well describe many politicians just about anywhere it did embolden Kongo to ask her about the graffiti in a private moment where others couldn’t hear. Here’s how that conversation went.

“So, what’s up with all the graffiti? Are there gangs in Prague?” Kongo asked with his most polite money smile.

“Graffiti? What is this?”

“The writing on the walls.”

“Maybe gangs here but they don’t write this. This is freedom.”

“Yes,” Kongo knew all about the velvet revolution that happened across central and eastern Europe after the Berlin Wall came down.