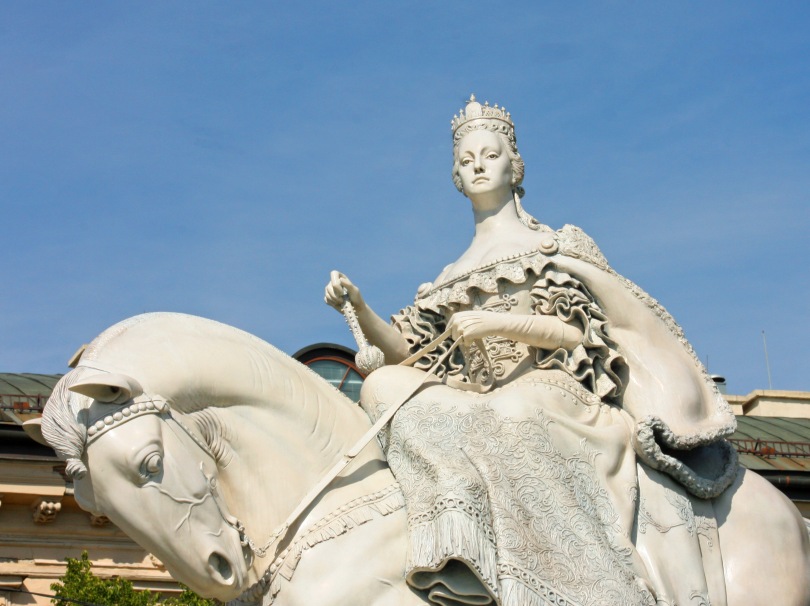 Few people have had as much influence on modern European history as Maria Theresa Walburga Amalia Christina, the only female who ruled the Hapsburg empire.  While touring central Europe on a river cruise Kongo got up close and personal with Maria Theresa.  Actually, you couldn’t help but get to know her since she had something to do with just about everything you could take a picture of from Budapest to Prague.  The picture above depicts Maria Theresa in Bratislava, which is now the capital of Slovakia.

Maria Theresa, the eldest surviving child of Charles VI, Holy Roman Emperor, was born in 1717 in Vienna.  Succession rights in those days were complicated and the timely death of her brother (she was born shortly after his death) and selective blindness to the Mutual Pact of Succession of Leopold I set Maria up as the presumptive heiress.  She reigned as absolute sovereign for 40 years beginning when she was 23 until her death in 1780 and ruled over the territories of  Austria, Hungary, Croatia, Bohemia, Mantua, Milan, Lodomeria and Galacia, the Austrian Netherlands, and Parma.

Maria is one of the few royals during this period who actually got to marry the one she loved despite other plans her father had.  One betrothed prince died of smallpox,  religious differences prevented another matching, and political unrest sacked another potential mate.  Eventually she married Francis Stephen, the son of the Duke of Lorraine in France.  He came to visit the royal family in Vienna when he was 15 and he and  Maria hit it off and a strong teenage romance ensued that survived the wedding machinations.  Together they had 16 children, including Marie “Let them eat cake” Antoinette.

When Francis died in 1765 Maria was devastated.  She cut her hair short, abandoned the fancy court dresses, and wore mourning attire for the rest of her life.  She withdrew from court life, public events, and painted her rooms black.  On the 18th of each month (Francis died on August 18) as well as the anniversary of his death Maria would lock herself in her chambers for private mourning.  She became a bit undone.

Since there weren’t a lot of five-star hotels in Maria’s day she simply had palaces built wherever she frequently travelled.  Of course, each palace had to have room to accommodate the 300-odd staff necessary to keep Maria in style, the court, and room for official visitors.  She did have 16 children after all and the young ones did need a place to play.  The Schonbrunn Palace on the outskirts of Vienna was the summer home of Maria and her growing brood.

One thing the Hapsburgs were really, really good at was marrying off their children.  Sure there were a bunch of wars at the time:  Thirty Years War, War of the Austrian Succession, Seven Years War and a host of other conflicts but actually they did a pretty good job of keeping the peace by making alliances with others.  Eventually everybody became cousins or second cousins and it’s harder to go to war with family than someone you didn’t play with as a child.  With 16 children (13 survived infancy) Maria was known as the mother-in-law of Europe.   By the time of her death, Maria had more than two dozen grandchildren.  This all lasted until the first World War where although most of the initial belligerents were related, they basically had bred the brains out of the ruling class and they couldn’t figure out how to avoid killing each other in the trenches.

Maria brought about many reforms during her long reign in the area of education, religion, medicine, and civil rights.  For example, witch burning was outlawed in 1776.  She survived an attack of smallpox when she was 50 and insisted that her children be inoculated, setting a tone for the empire that did much to curb the ravages of this disease.

Maria died in November 1780.  She probably never fully recovered from the effects of smallpox and suffered shortness or breath, fatigue, and other ailments.  She also never fully bounced back after the death of her husband.  She died surrounded by her children and with her passing the House of Hapsburg died out.  She is buried in the Imperial Crypt in Vienna.