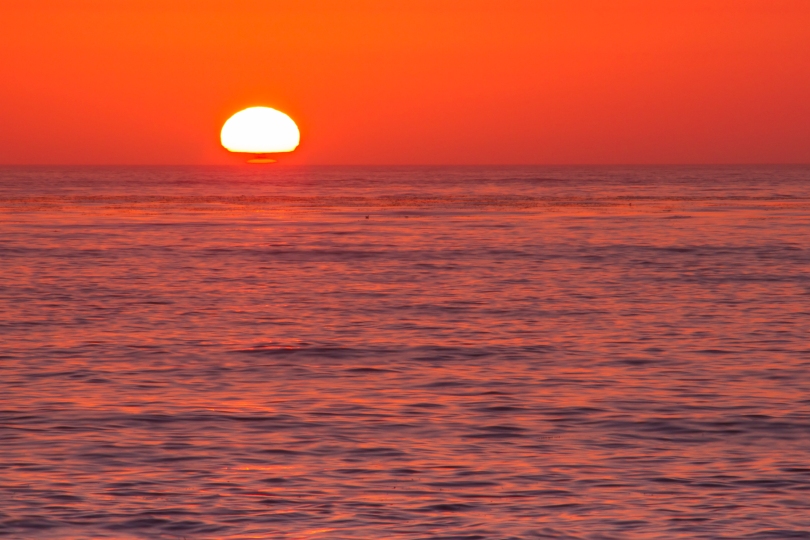 Clever monkeys will quickly observe that the sunset above is NOT a green flash.  Kongo went in search of this elusive phenomena last evening at the Sunset Cliffs overlook in San Diego.  It was a perfect evening for a green flash.  Dry air, clear horizon, and so forth — all the elements necessary to spot the green flash.  Alas is was not to be and Kongo wasn’t the only one looking for the green flash last night.  There were other weird things about this  photo shoot which just goes to show you that monkey photographers have to be ready for anything.

Kongo arrived at his chosen spot early, secured a good parking place, and had all his gear.  Different lenses, the Cokin filters, remote shutter activator, tripod, and so forth were laid out and ready for action.  The plan was to take some slow shutter speed shots of waves crashing against a prominent rock at sunset then switch over to try and capture the green flash.  It didn’t quite work out that way.

The scene above is the one Kongo had staked out.  It had all the elements the monkey was seeking:  crashing surf, golden rocks bathed in sunshine, a clear sky that would turn orangey-purple as the sun went down.  Really kind of nice.  Then came the intruders. 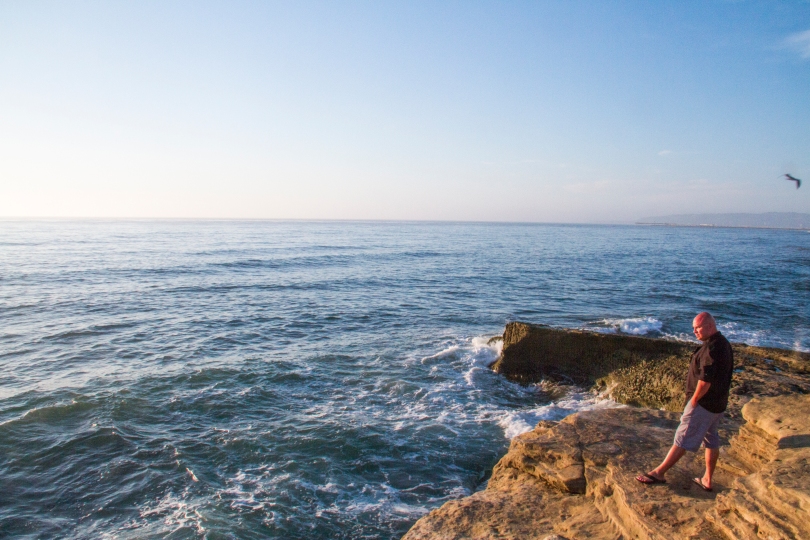 Along came this couple dedicated to iphonography, a branch of photography that the monkey uses only as a last resort or emergency.  This nice gentleman from someplace in LA parked himself in Kongo’s viewfinder for about 10 minutes while his better half struggled to take serious, contemplative images of him with her iPhone.  The monkey patiently waited.  I mean, how long could they keep this up?  Well it turned out they could keep it up for some time.  She kept complaining about the glare from shooting into the sun.  Hmmm.  Kongo refrained from mentioning that her beau’s shiny pate might be contributing to the problem but that would be cruel so he just put his simian lips together and pressed firmly.

Finally she asked brightly, “Are we in your way?”  The monkey nicely admitted, well, yes, you are in my way and they scampered off apologetically.  It is a free perch after all and the monkey certainly didn’t own the view but waiting 10 minutes for someone to clear the area seemed a bit much.  Anyway, more intruders were on the way.

Just as the nice couple from LA moved to a different spot to take contemplative photographs about a dozen drunk German tourists arrived on the scene.  Before Kongo had time to shout, “Hey, wait, there are rocks down there!” they began flinging themselves off the cliff!  The monkey sorely wished he was faster with the buttons but it all happened so quick he didn’t have time to change settings so he captured these Teutonic daredevils with his come as you are settings.  In hindsight the blurry images worked out OK and were probably how these young men would remember their adventure the next day.

it was clear that this group wasn’t going to leave when one of them opened his backpack and began pulling out pilsners all around.  (A big no-no along San Diego beaches) The monkey moved. 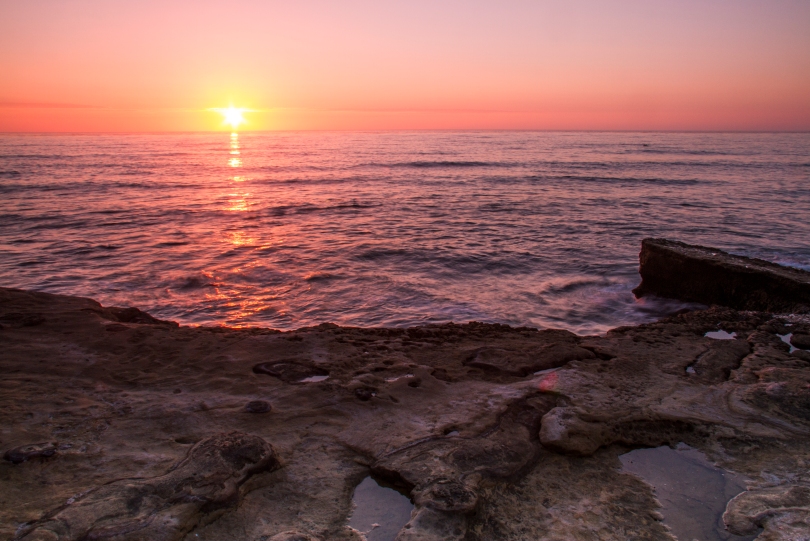 The crashing surf wasn’t so great in this shot but Kongo was happy with the sky.  Sometimes you have to just make do.

The nice couple of LA followed Kongo and the iPhone damsel stayed behind Kongo and eventually they struck up a conversation.  The man wanted to know about the green flash.

“Are you from around here?”
“Yes,” the monkey replied.
“Is there such a thing as a ‘green flash’ or is that just a story?”

Do only locals know about the green flash?  Sheesh.  Anyway, Kongo has been a green flash fan since he first saw one from the bridge of a destroyer about 30-some years ago and he proceeded to inform the nice man from LA what the monkey recalled from studying The American Practical Navigator by Nathaniel Bowditch on mid-watches at sea.

You see, the earth’s atmosphere acts as a prism and as the sun gets low on the horizon (you can even see a green flash at sunrise but who is up at that time of day?) it begins to separate the different colors of light.  Green is the color which is the last to get split off so if you have a clear horizon you can frequently see a green glow spot just above the sun as it sinks below the horizon.  Technically you can also see orange, purple, and yellow glows too but the green flash is most noticeable because it is the last one and tends to linger just a moment.

So, if you go back to the first photo in this rambling series you’ll see that the horizon isn’t quite so sharp as you might first have thought.  If you look carefully you will notice a thin, horizontal band across the lower limb of the sun.  That’s a cloud layer and it obscured the green flash last evening off Sunset Cliffs.

After Kongo shared this nautical lore with his new friend, he said, “Wow, I thought it was just a bar or something.”  Well, it’s that too.

It’s easier to see green flashes at sea than from shore.  The last time Kongo recalls seeing a green flash from land was a few years ago while he was drinking perfect martinis at the Marine Room in La Jolla and watching the sun go down.  While imbibing, Kongo explained the green flash details to a skeptical clutch of family members and then the monkey took a certain amount of I-told-you-so satisfaction from their surprised exclamations when that lovely green glow hovered above the sun as it disappeared in the general direction of Hawaii.  Don’t ever doubt a monkey that has spent time at sea.