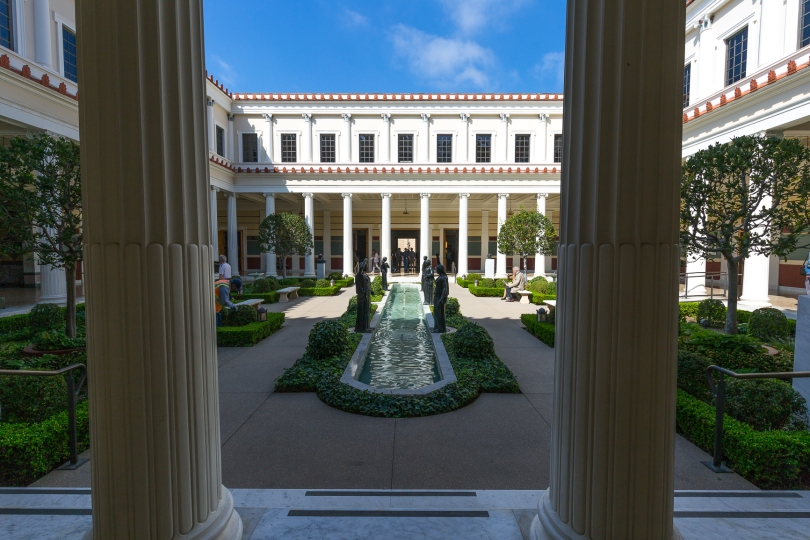 Kongo headed to the Getty Villa on the Malibu coast on Friday to dine with the gods.  No really.  He attended a culinary workshop titled “Dining with the Gods” based on a real menu that would have been served up at a villa on the shores of the Gulf of Naples early in the first century.  The Getty Villa is inspired by the floor plan of the Villa dei Papyri owned by Lucius Calpurnius Pico Caesoninus.  Getty’s villa was built to house Mr. Getty’s extensive collections of ancient Roman artifacts.  The original villa, now partially excavated by archeologists, sat about halfway up the slope of Mt. Vesuvius in the town of Herculaneum with spectacular, unobstructed views of the ocean.  Of course, we now know that location, location, location may not have been such a real estate truism in ancient Rome, particularly near Vesuvius.  The villa and the entire towns of Herculaneum and Pompeii were completely buried under the ashes from the eruption in A.D. 79.  Not to worry, our dinner party was held well before the mountain blew its top.  Similar to the original villa, the Getty villa sits halfway up the slope of Pacific Palisades at the southern end of Malibu overlooking the Pacific Ocean. 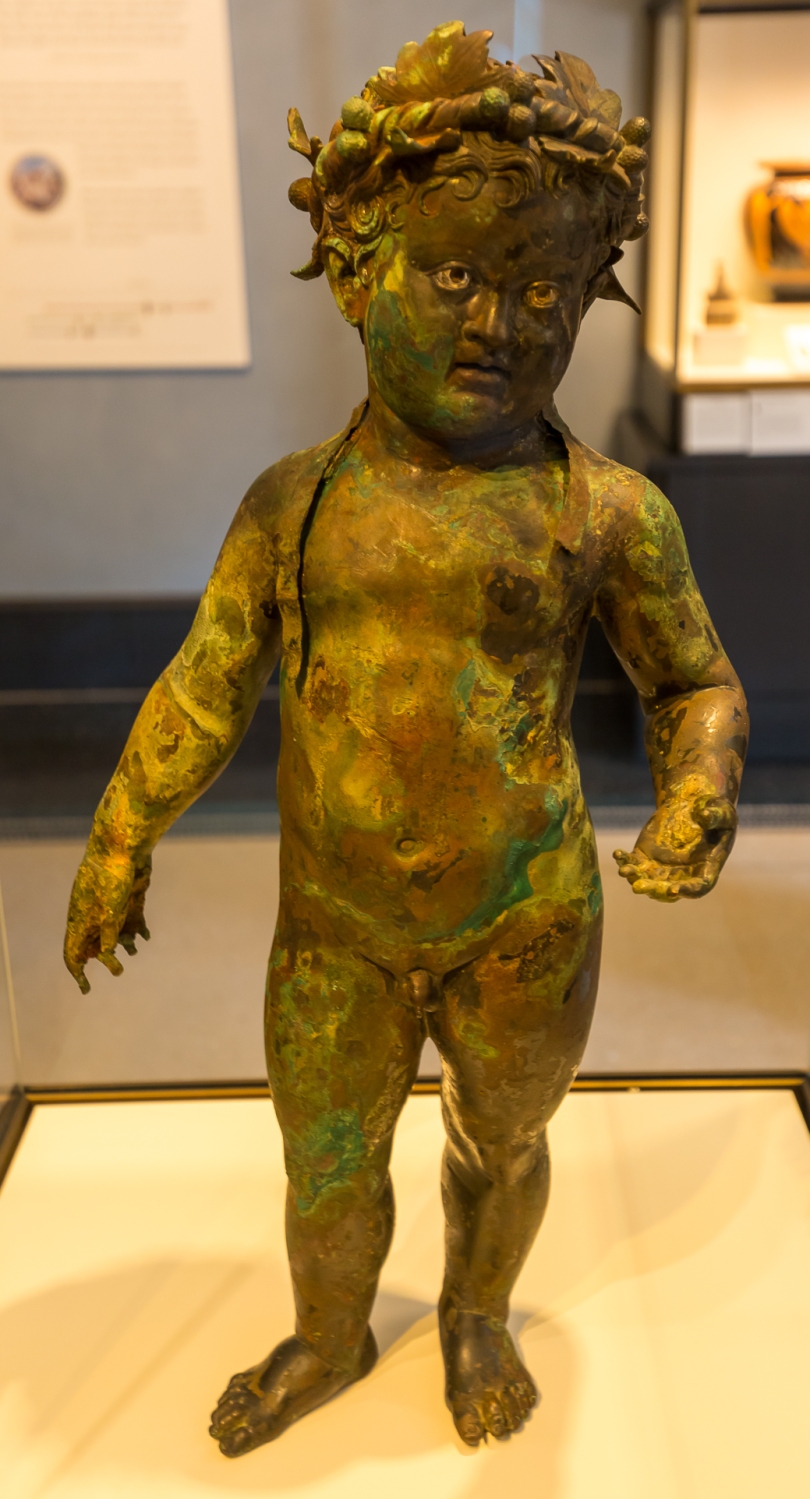 So the idea behind the culinary workshop is that twenty lucky guests are invited to attend a dinner party at the villa but first you have to help prepare all the dishes.  That’s where the workshop part comes in.  Before that we got a lecture on what they ate in first century Rome, where the food came from, how it was prepared, and the relationship of the food to various Roman gods.  The recipes actually came from De re Coquinaria (On the Subject of Cooking) written by an early Top Chef named Apicius who was a famous gourmand from the first century.  It is the only cookbook to have survived antiquity.

This baby Bacchus was one of the favorite artifacts Kongo saw on the tour.  This little guy symbolized wine, frivolity, wild parties, fertility, and a lot of other fun things in ancient times.

The Getty Villa is filled with exact reproductions of statuary found at the villa site in Italy.  These works of art grace the gardens and hallways.  It makes you want to head out to an antique store and pick up a couple for the backyard patio.  These are so much classier than a baby bear cub carved with a chainsaw or one of those Bambi cement deer statues you can find on certain byways in the Midwest.

There were also some pretty cool vases that seemed to have stood the test of time.  Kongo thought that the one below would be perfect in a niche he had built into his front room during a recent remodel.

So the ambiance was great but what about the food?  Well, the menu should whet your appetite:

Now each of these were linked to a sponsoring Roman god.  Bacchus, for example, the god of wine would of course take over the spiced wine.  Minerva, who gave mankind the olive tree gets the relish.  Proserpina (Persephone), the vegetable goddess, was the logical choice to be the salad sponsor and the recipe included fresh pomegranate seeds (the only thing she ate while in the underworld causing her to be relegated there for six months of each year).  Venus, born in a scallop shell, of course supervised the scallops.  Europa likely ate sea urchins on her trip across the Mediterranean to become the first human in Europe. Ceres (this is where the word cereal comes from), the mother of grains and wheat, was Queen of the Porridge.  Ulysses lamb chops are in honor of his escape from the cave of the Cyclops Polyphemus by clinging to the underside of a sheep.  Diana, the goddess of the hunt, brought a rabbit to dinner.  Adonis was done in while hunting a boar that didn’t take kindly to being game so he gets sausage.  Poor Polypheus, the one-eyed monster who made cheese and had his eye poked out by Ulysses, gets the honor of the cheesecake.  And of course, the dinner has to wrap up with homage to Pomona, the fruit goddess.  And finally (whew!), good Baucis of Philemon and Baucis who entertained the gods with their humble fare get their just desserts. 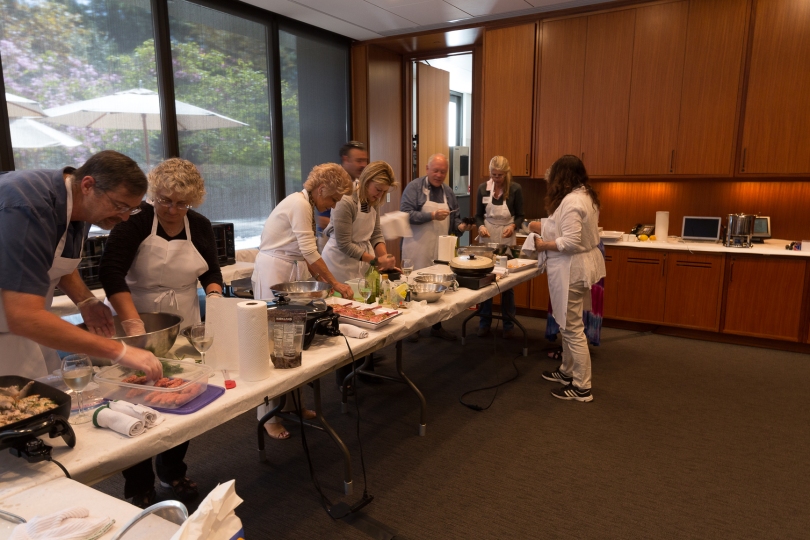 Each of the 20 attendees got to choose which dish they would prepare.  Some dishes required a bit of a group effort, like scooping out the roe from live sea urchins, or making the boar sausage.  We donned our white aprons and went to work supervised by the lovely goddesses who also were the support staff at the Getty.

Can you guess which dish Kongo prepared?  Why the spiced wine of course!  Kongo is a big Bacchus fan and knows his way around a wine bottle.

It was an interesting recipe.  Kongo made spiced wine for 20 but the recipe below is for six and he highly recommends you pull this one out of your hat the next time you have a dinner party.

Pour half the wine and all of the honey into a saucepan; bring it to a boil for a few minutes and cook until all the honey dissolves.

Remove the saucepan from heat and stir in the remaining ingredients.  Cover and let the flavors infuse into the liquid.  Let it cool.  (If you’re in a hurry put it in the fridge)

When cool, add the rest of the wine.  Using a fine sieve, pour the entire mixture into a serving pitcher.

The wine can be served hot, warm, room temperature, or cold.  It can be served anyway you like.  Maybe you could even make a popsicle out of it.  Kongo thinks hot spiced wine around the fire pit on brisk California night would be just about perfect!  An added bonus is that the you get to eat the wine soaked dates afterward.  Delicious!

The wine was a big hit with all the guests and Kongo was pleased to see everyone going back for seconds.  The head chef whispered in Kongo’s ear that his product was MUCH BETTER than the batch the Thursday group made.  She thought maybe they put in too much honey.  So there!  Monkeys know wine.

Mrs. Kongo holds down the end of the table where the ladies are making Proserpina’s Mixed Green Salad.  Since she has a granddaughter actually named Persephone this was a no brainer for her and her job was to dig out the pomegranate seeds for the salad.

The most exotic dish, at least for Kongo, was the sea urchin.  Each urchin has about five bites of roe inside and is best eaten raw.  At least that’s what they told us.  And you start out with live sea urchins.  Be careful of those spines. 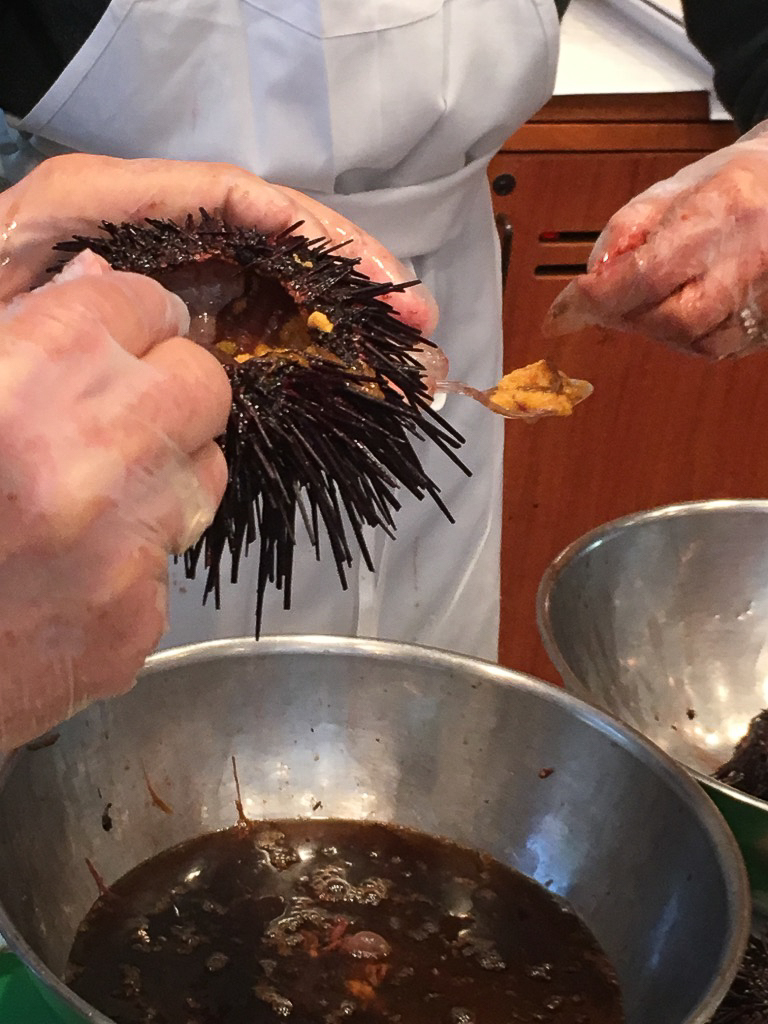 Diana’s rabbit was delicious and the Ulysses lamb chops were to die for.

Now Kongo is not an adventurous eater and has a notoriously unsophisticated palate but he thinks he was just born in the wrong century.  Like he missed his calling by 20 centuries.  He LOVED everything and cleaned his plate.  Perhaps it was the wine that gave him a new perspective.  The smells in the workshop as lunch was being prepared were wonderful.

There were obviously a few concessions made to modern times.  We didn’t cook in a Roman kitchen and did take full advantage of electric ovens, refrigerators, and hot plates.  Afterward we ate on white linen on a shaded patio instead of lounging on a Roman divan and eating with our hands.

While eating, our head chef, Robin Trento, read from Ovid’s The Metamorphoses during the meal.  This could well have been part of the evening entertainment at a real Roman dinner party in the first century.

You can learn about the Getty Culinary Workshops here.  Schedules and themes vary.  Cost for the workshop is $95.  You can visit the Getty Villa for free but parking costs $15 (its included in the workshop price) and you must get a ticket in advance.  Check the Getty Villa website for details.  The Getty Villa is located in Pacific Palisades just off Pacific Coast Highway.

As they might say in Rome:  BONUM HABEAT APPETITUM!

Travel safe.  Have fun!  If you want the recipe for any of these other godly dishes, just send Kongo a note. 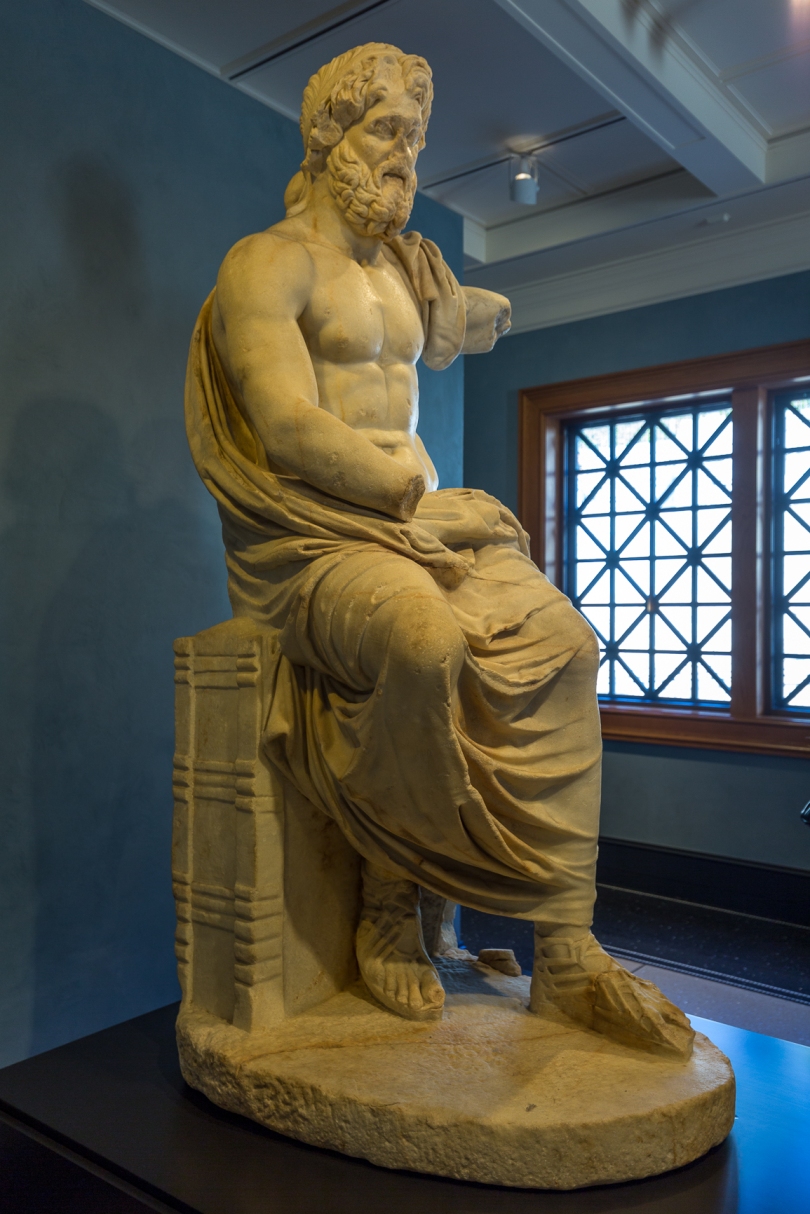