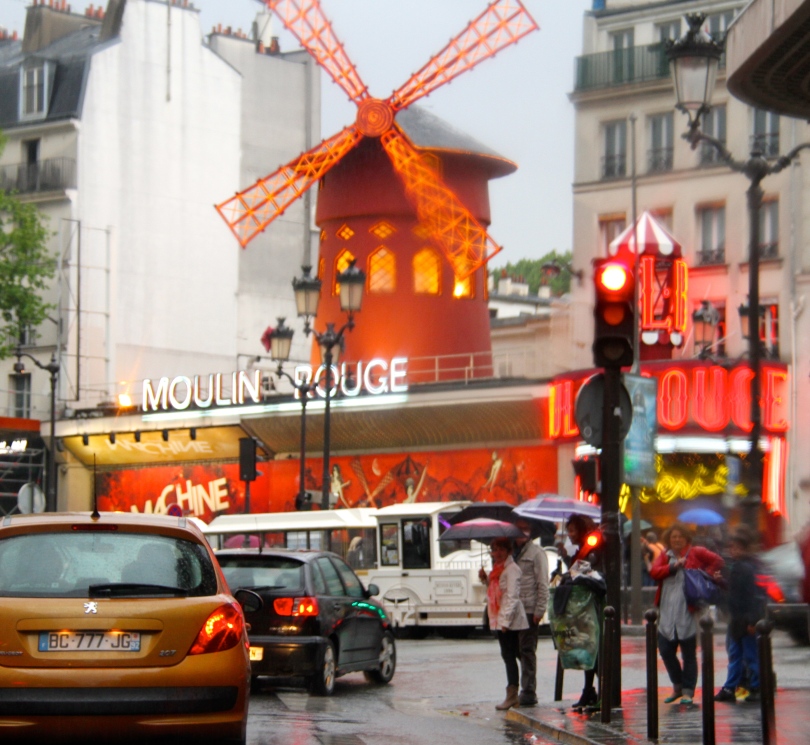 The Cabaret Monkey joined a thousand or so of his best friends last night to take in the high kicking, dazzling, amazing, funny, and altogether over-the-top venue at the famous Moulin Rouge (Red Mill) in the heart of the Paris red light district.

Sure this is a tourist spot. And yes, it is expensive, even by Paris standards.  For 109 Euros per monkey, Kongo got bolted on to a large group from Shanghai (Nǐ hǎo!) at a cozy little table in the fire lane with two bottles of champagne and a white table cloth.  The champagne was good and cold, the view was fantastic, and watching the people before the show was almost as much fun as the revue itself!

In many ways the show is like a Broadway musical.  The lights, costumes, and sets were terrific.  There were ventriloquists, jugglers, bare breasted mademoiselles in glittering thongs with towering feather head pieces, and even a nearly naked young woman who swam in a large glass tank that rose out of the stage and was filled with large, live boa constrictors.  And of course the show ended with a bang, bang, bang, high-stepping, undie-flashing, leggy Can-Can.  It made you want to jump up and join the French Foreign Legion or march down the Champs-Élysées and wave the tricolor.  Do you get the idea that Kongo liked the show?  He certainly did!

Picture taking is not allowed inside but the images are firmly implanted in this little monkey mind and it was an evening he won’t soon forget.

Kongo recommends the 9 PM show, don’t pay the extra for dinner (an additional 70 Euro per person) and brush up on your Chinese language skills before arriving.  The Paris Metro    Blanche station is across the street.  Very easy to get to.