The land iguanas in the Galapagos are fierce looking but they won’t hurt you.  While their prehistoric appearance may startle you at first they tend to grow on you and pretty soon you’ll be saying “Iguana love you forever…” to your honey after an island outing.  Really.  And if that line doesn’t work you can always try (not recommended by the monkey) telling her that you do not suffer from “a reptile dysfunction.”  I know.  I know.  Read on for the bar joke.

There are three distinct species of land iguanas in the Galapagos, depending upon which island you are at.  While these species are not really endangered, some islands have had their population reduced by dogs or hunting by humans, and an aggressive breeding and reintroduction program by the Galapagos Conservancy works to correct the imbalances caused by unnatural factors.

These guys don’t bite.  They’re herbivores and mostly eat prickly pear.  The males are territorial and use lizardly intimidation techniques to keep other males out of their claimed space.  Below, a couple of iguanas face off on Floreana Island.  These two basically huffed and puffed at each other for several minutes until the interloper (the iguana at the bottom) moved off to a friendlier locale.

One very fascinating fact about these lizards is the symbiotic relationship they’ve developed with the little Darwin finches.  The iguanas raise themselves off the ground and allow the birds to crawl around underneath them to remove ticks and other bugs that attach themselves to the lizard’s skin.  The giant tortoises in the Galapagos do the same thing.

Iguanas live about 50 years.  Females lay their eggs in sandy soil where they can dig a burrow and lay up to twenty eggs at a time.  After defending the nest for a short time, the mothers abandon the eggs and let the sun do the incubation.  Baby lizards dig their way out of the nest about four months later. 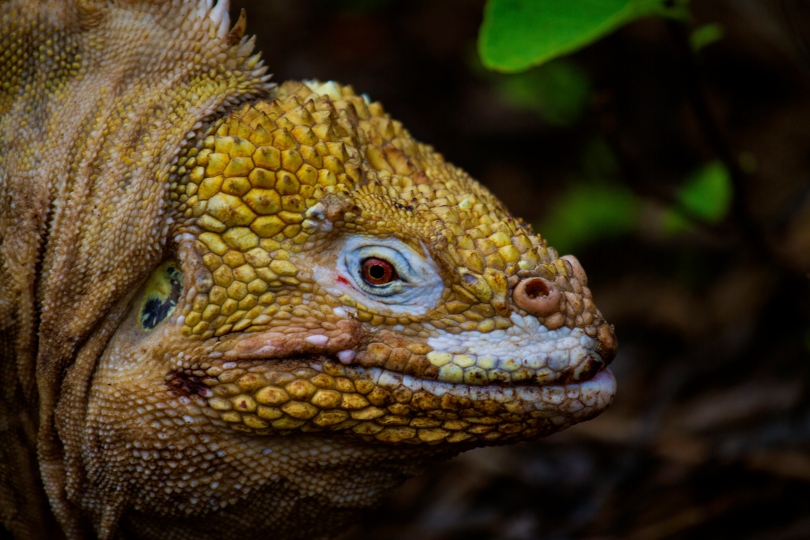 These iguanas have a common heritage with the marine iguanas that live along the shore and can swim in the ocean waters.  On South Plaza island the land iguanas and marine iguanas sometimes actually breed together but the offspring are sterile.  These hybrid iguanas live a lonely life.

So, this iguana walks into a bar with a frog and asks for a beer.  The bar tender leans across the counter, looks at him with a gimlet eye and says, “We don’t serve frogs in this bar.  Move along Lizard Breath.”

The iguana says, “Hey, come on.  This is a special frog and he can sing.  Give him a beer.”

The barkeeper thought for a moment and said, “OK, if this frog can sing then that would be pretty special.  Have him sing ‘The Star Spangled Banner’ and I’ll give you both a free beer.”

The iguana nodded at the frog who jumped up on top of the bar and belted out a rousing rendition of the national anthem.  It was so moving that all the bar patrons stood at attention and saluted and some of the old veterans in the back had tears in their eyes.

The bartender shook his head and said, “That was wonderful.  Here’s your beers”  and slid two cool drafts down the counter.

The frog hopped off the counter and disappeared out the door but the iguana quickly downed both beers, burped, and asked for two more, which the bartender provided, still shaking his head and expressing his amazement.

One of the patrons came up to the iguana and said, “Man, that was simply amazing.  I’ve never seen or heard anything like that before.  But where did the frog go?”

The iguana leaned back on his stool and whispered to the admiring customer, “That frog? He had to get out of here before someone asked for another song.  You see, he really can’t sing and I’m a ventriloquist and that’s the only song I know!  Besides, everyone knows frogs don’t drink.” 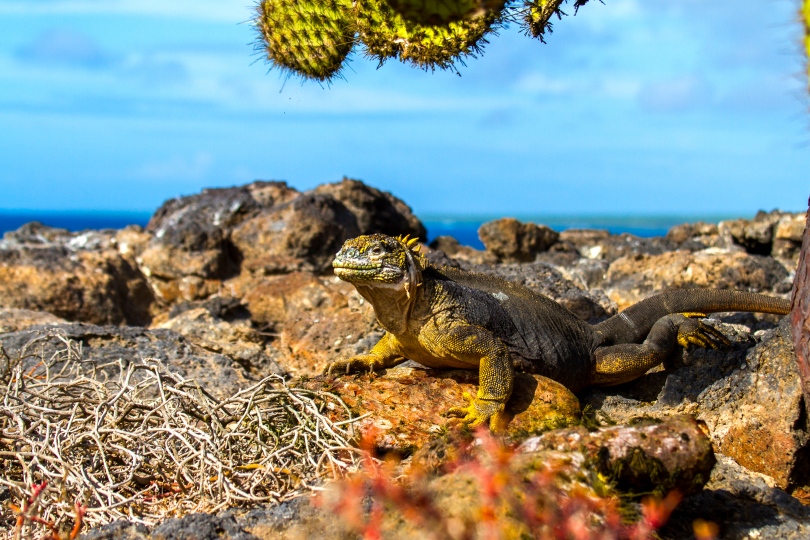 Now, do you know what an iguana’s favorite movie is?  The Lizard of Oz.