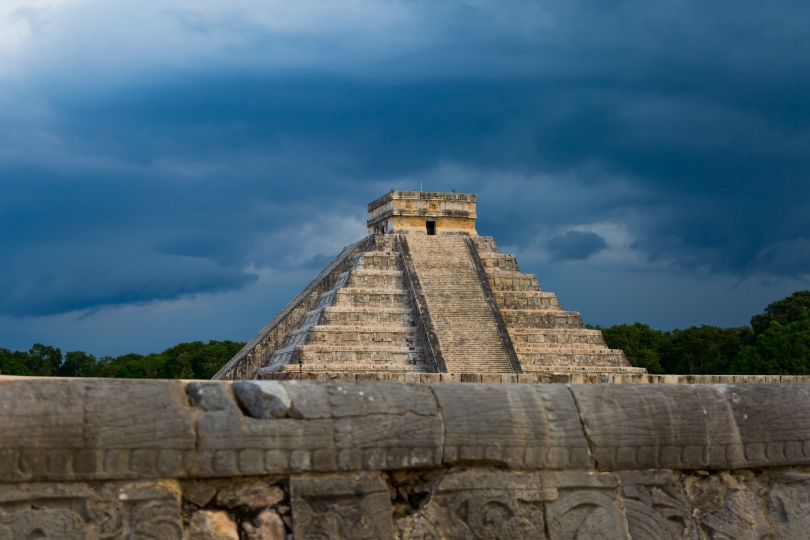 Kongo made it to Chichén Itzá yesterday on a 10-hour adventure that involved excursions into Mayan culture, home remedies, thunderstorms, and a discourse in the Mayan language complete with lectures on the alphabet and a bit of the linguistic background of the Maya language. Erik Martinez, a cultural anthropologist and Kongo’s tour guide, was the adventure master for this excursion.

Spelled Chichén Itzá in Spanish but frequently Chichen Itza’, which preserves the phonemic distinction between the ch’ and ch, since the base word ch’e’en (which isn’t stressed in the Mayan language) begins with a postaveolar ejective affricate consonant.  The “Itza” has a high tone on the “a” followed by a glottal stop, indicated by the apostrophe.  (Thank you Wikipedia!).  Now the monkey has absolutely no idea what that means and he threw it in there just to see if his youngest son, who is just starting his linguistic career as a professor at Harvard, is actually reading his blog.

UPDATED:  So, just to set the record straight on the Mayan language, Kongo’s youngest simian provides an update about the correct pronunciation of the Mayan language, just in case some of you gentle readers were confused by the above explanation:  This clears it all up!

The wikipedia article doesn’t make any sense as written. What it should say is that many sources prefer ‘Chich’en Itza.’ That way it differentiates between two sounds which are considered different sounds in Mayan: an English-like ch-sound (spelled in Mayan) and an ejective ch-sound (spelled <ch’> in Mayan).
Both of these sounds are affricates – it means you make a full closure in the mouth, so that no air can escape, and then release that closure slowly, so the air makes a hissing sound as it escapes instead of a sudden “pop” (like you get when you just say a “t”). The ejective sound has an extra strong “pop” because while you are blocking the air so it can’t escape the mouth, you slam your vocal folds shut and then raise them. This compresses the air above the vocal folds, so that when you do let the air out of the mouth the sudden decompression makes a particularly strong popping sound.
You can hear examples of these sounds here:
http://www.phonetics.ucla.edu/vowels/chapter12/quechua.html

Listen to the difference between ‘bridge’ and ‘hoarse’ in particular. The word for ‘hoarse’ has the ejective <ch’> sound.

Hope you’re having a good time in Mexico!

(Also, a glottal stop is just the sound that many British people say in “butter” – and it’s the sound you say in the middle of the word uh-oh)

Thanks so much, Patrick!

Anyway, Erik, who does apparently know a thing or two about the Mayan languages gave a great talk about the symbols and alphabet on the bus ride from Cancun to the archeological site.  Erik is one of those passionate souls you sometimes find when traveling and taking tours who is absolutely over the top about his subject.  And he is passionate about Mayas in several languages because we had English, Scots, Danish, Brazilian, Spanish, and a few Americans on the bus.  Often the guides you get are tired of talking about the local sites and culture to indifferent tourists but not Erik.  You were not going to get through his tour without some of that passion rubbing off on you.

Kongo knows a lot about the Maya too.  When he was a young simian he read several books about this mysterious culture and his guide yesterday was extremely well versed in all things Mayan and added to things the monkey already knew.  Learning something new is always a good thing.  Did you know, for example, that Mayan language is still spoken across Yucatan or that NASA has declared that the Mayan calendar is the most accurate one ever invented?

The jaguar throne above was a popular theme for the Maya.  The jaguar was an amazing animal that used to roam the jungles of the Yucatan peninsula and is frequently seen in Mayan bas reliefs and as little thrones like this one. The Spanish called this pyramid El Castillo or The Castle.  Actually, a lot of places in Central and South America you come have buildings the Spanish called castles and really  weren’t castles at all  (There’s another El Castillo at Tulum, which was actually a nautical range used to guide ships in through the reefs).

This is actually the the Temple of Kukulkan.  Kukulkan was the feathered Serpent god that the Aztecs called Quetzalcoatl (another one of those easy words to pronounce.)  During the equinox, the light reflects off the stepped pyramid to form the shadow of an undulating serpent that travels down from the top of the pyramid to  a stone serpent head at the base, symbolizing to the Maya that God was descending from the heavens to earth. This is a pretty cool astrological light show the Mayan scientists invented. They also invented the binary number system of 1s and 0s so all they needed was a few transistors and they could have built the first iPad!

Late in the afternoon a thunderstorm was rolling in from the East while the western sun shone on the Temple of Kukluckan making a dramatic image.  The pyramid was used for religious and astronomical purposes and the temple is perfectly aligned for the equinox days.  The Mayas were expert astronomers and even had an observatory at Chichén Itzá.  The temple was built atop earlier versions of lesser pyramids.

Unfortunately most of the body of science the Mayas accumulated has been lost as the Spanish (who couldn’t speak Maya) looked at the symbols and serpents and quickly determined this was all about devil worship and burned the lot of Mayan written knowledge in 1562.  The Bishop of Yucatan, a religious do-gooder named Diego de Landa Calderón, let the bonfire. The Temple of the Warriors and the hundreds of columns that surround it is another interesting sight.  At one time the columns support a roof structure so it was a pretty big area.

There was also a ball court at the site.  The exact rules used by the Mayas are unknown but it is thought to be similar to a modern game known as ulama, which is kind of like volleyball without a net.  The play with solid rubber balls weighing up to 9 pounds each and you can get bruised pretty quickly bouncing those puppies around.  There was also ritual sacrifice associated with the games so it wasn’t too much fun to be on the losing side.  At Chichén Itzá there were rings mounted on either side of the court that were about 18 feet above ground.  Passing the ball through the ring often meant somebody was about to move on to another career in a hurry. Along the way to the site Kongo ate lunch at a combination curio shop and restaurant that is built to support visitors to Chichén Itzá.  The food isn’t bad and if you need a new set of Day of the Dead salt and pepper shakers this might be your kind of tourist stop.  They also had some Mexican dolls and of course, the classy sombrero with all the ornate stitching and little dingle balls hanging from the rim, but Erik our guide explained that Mexicans don’t wear sombreros (unless you are from Jalisco and play in a mariachi band) so if you buy one you’re basically advertising that you’re just another clueless gringo. 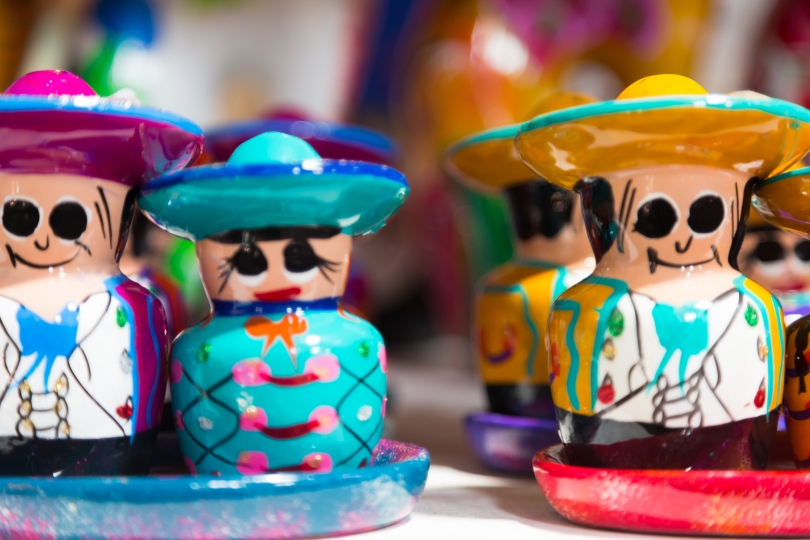 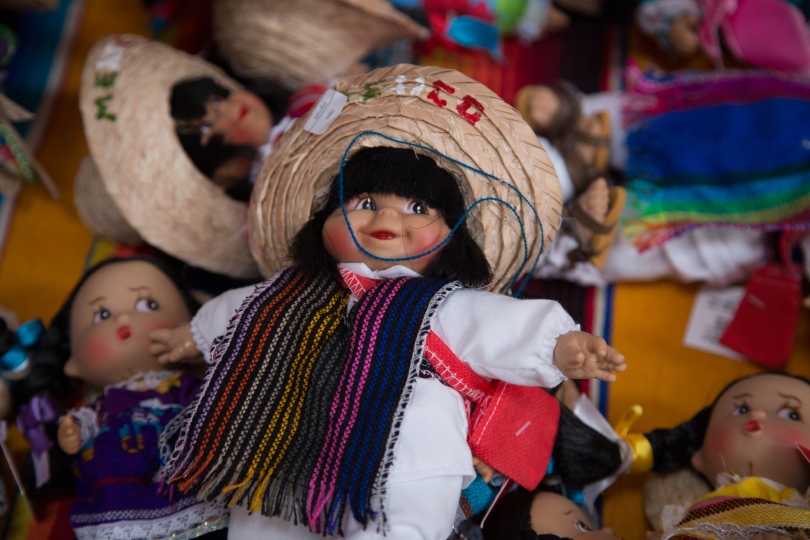 Kongo hopes that if you make it to Cancun you visit Chichén Itzá.  Look up Erik before you come (click on his name above) and he’ll take care of you. 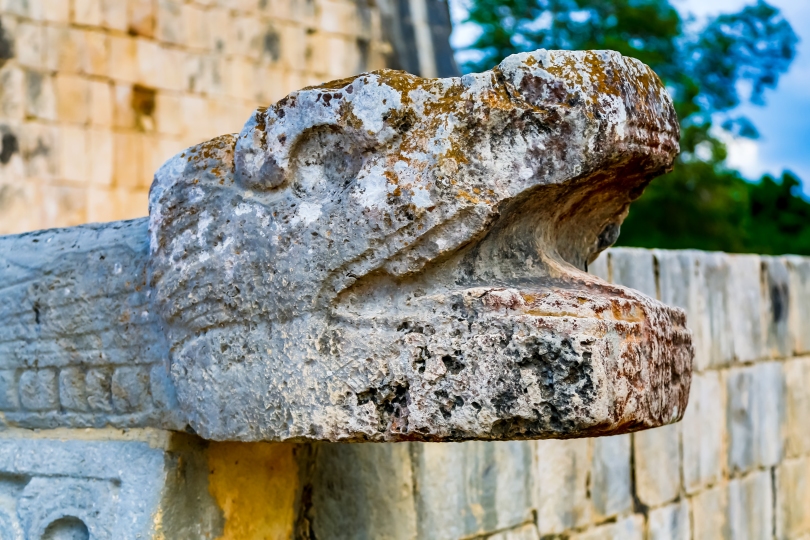 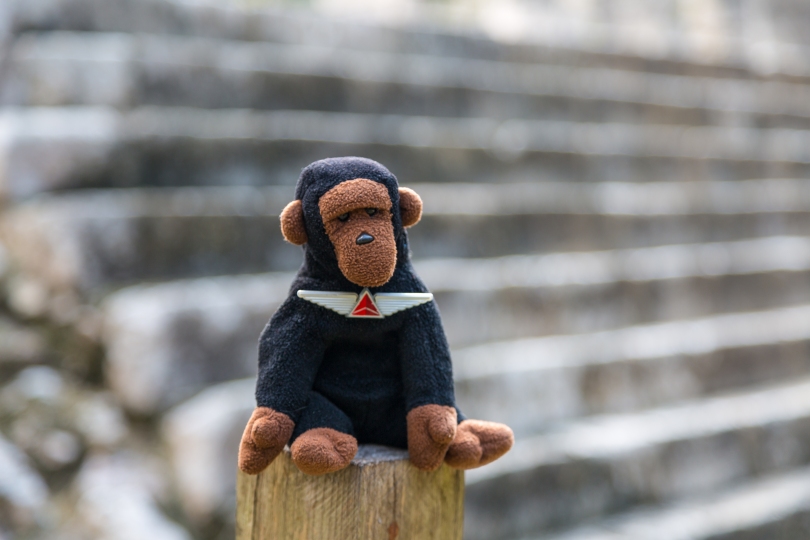